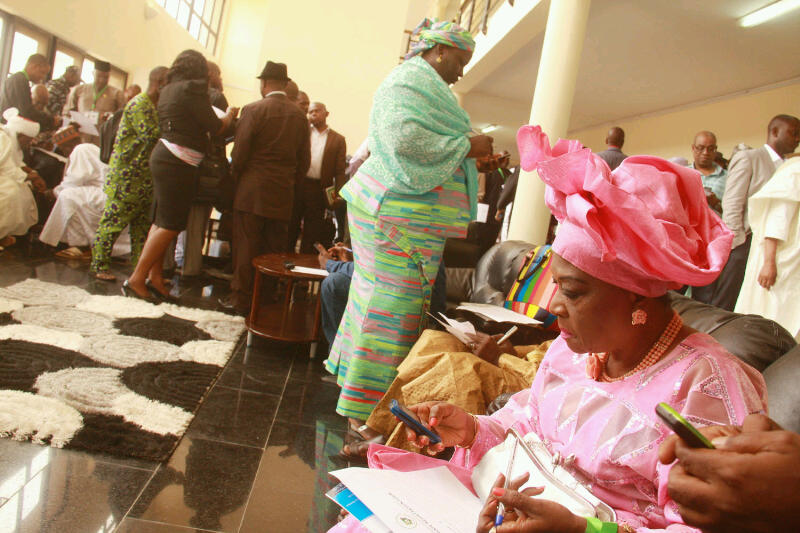 Delegates Ita- Giwa and Nuhu Sanusi say many of the problems Nigeria is facing were caused by some of the delegates to the National Conference.

Two delegates to the ongoing National Conference, the Emir of Dutse, Nuhu Sanusi and former Senator, Florence Ita-Giwa, have blamed Nigeria’s intractable problems on the country’s prominent leaders and citizens, including delegates to the confab.

Mr. Sanusi and Ms Ita-Giwa spoke in Abuja Tuesday at the first plenary of the conference, which turned out to be a dramatic session.

The duo, who expressed that opinion while contributing to debate on the general principle of the conference, also noted that they (those who created the country’s problems in the first place) were in a position to resolve the nation’s difficulties.

Mr. Sanusi, who reacted to comments by some delegates which he believed could stoke conflict, pleaded with his colleagues to eschew bitterness in order to address the problems facing the country.

He said, “We are responsible for what Nigeria is facing today and we are also the answer to the problem of this country. There is corruption from the local government to the highest level.”

The monarch also reminded delegates of the needless deaths of jobseekers across the country during the Nigeria Immigration recruitment interview on Saturday.

He said there was urgent need for jobs to be created for millions of jobless youths to forestall a similar tragedy in the future; adding that instead of bickering, delegates should consider ways of creating jobs for Nigerians and curbing corruption.

The Emir drew applause from his colleagues when he pointedly said, “We are not in this Conference to fight.”

On her part, Ms. Ita-Giwa said many of the problems Nigeria is facing were caused by some of those appointed delegates to the Conference.

“Some of the problems facing this country today were caused by some of us who are in this Conference,” Mrs. Ita-Giwa said.

She also appealed to the leadership of the Conference to allow each delegation make presentation, adding that every delegation has a position on critical national issues.

On a dramatic note, the former lawmaker called for a flower vest that was kept in front of Kutigi to be removed so that he would have direct eye contact with delegates on the floor.

Others queried why the Conference Secretariat failed to pay their aides, including security, drivers and personal assistants.

Fiery Lagos pastor, Tunde Bakare had drawn attention to the Islamic prayer offered by Conference Chairman, Idris Kutigi before calling the Conference to session and called for a uniformed prayer.

“Mr. Chairman,” he began, “yesterday you said something at the inauguration of the Conference and I did not understand. Today again, you said it. I think you should pray in the way all of us understand because if I stand up and say, ‘Praise the Lord somebody,’ we will turn this place into a church service.”

Another delegate complained about a situation where members who arrived early were asked to vacate their seats for elder statesmen and monarchs, who came late.

He insisted that since delegates represented people and groups, equality of membership should be maintained.

Former Governor of Ogun State, Segun Osoba vehemently disagreed with the member, saying that the seating arrangement should be in alphabetical order while consideration should be given to delegates from age 80 and the physically challenged.

The Chairman of Stanbic IBTC Bank, Atedo Peterside, supported Mr. Osoba’s position on the seating arrangement but also called for the gallery to be fitted with wireless internet connection.

The Conference, which commenced sitting almost an hour behind schedule, was called to session by Mr. Kutigi at about 10.48 am.

Justice Kutigi, however, apologised to delegates for the delay and blamed it on the inability of the secretariat to complete the registration of delegates.

Mrs. Azinge, who responded to most of the questions raised by delegates, said plenary could not commence in earnest due to the non-availability of Conference Standing Rules and Procedure.

She announced that the Rules and Procedure as well as the 1999 Constitution would be distributed to delegates on Thursday and would be discussed and adopted the same day.

Mrs. Azinge said the Conference would adopt the alphabetical seating arrangement proposed by Mr. Osoba but urged delegates to avail themselves of the services and facilities at the National Judicial Institute.

She maintained that the secretariat had searched for an alternative convenient location to host the Conference to no avail, stressing that the NJI was the best option available.

For the registration processes to be completed and proper arrangements made for delegates, Mrs. Azinge pleaded with members to provide the secretariat with their account details and medical information.

Mr. Akpandem had informed delegates that the Conference was already on the internet and gave the web address as www.nigerianationalconference2014.org

After a prolonged session of comments and suggestions, Mr. Kutigi called for motions and the Conference was adjourned till Monday.

See how the Immigration recruitment exercise went down in Kaduna. Candidates jostled for test papers