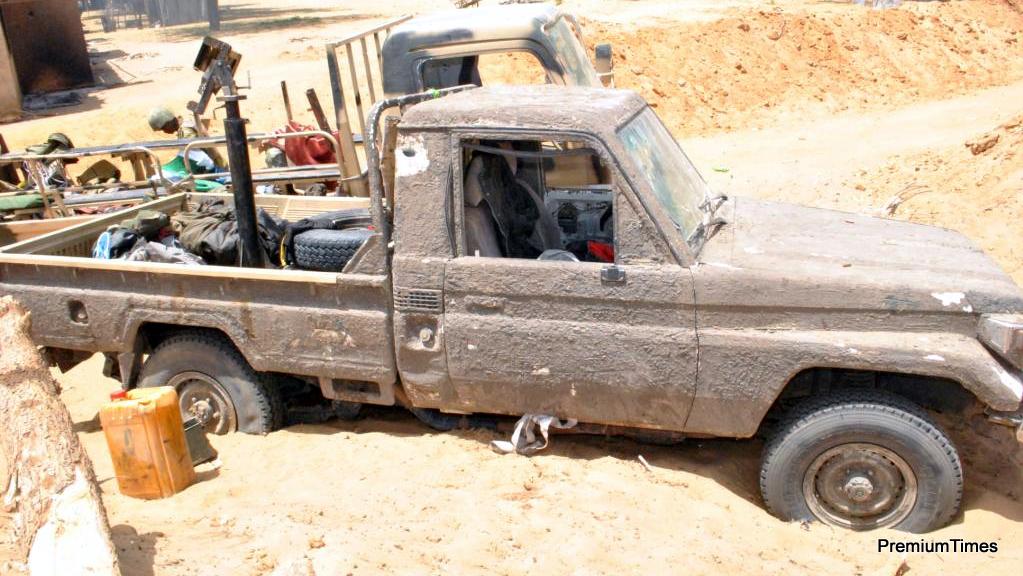 One of the vehicles used by the attackers captured by troops... Photo: Courtesy Defence Headquarters

The attack came days after the military said the chief of army staff has relocated to Maiduguri.

Nigerian security forces, and members of a local vigilante killed at least 207 Boko Haram militants who launched a daring attack on a military barracks and other neighbourhoods of Maiduguri, Borno State, the vigilante group, known as the civilian-JTF, said Friday.

Members of the civilian-JTF said they counted at least 207 corpses of suspected Boko Haram members killed during clashes with government troops early Friday.

One leader of the vigilante, Mallam Abdullahi, told PREMIUM TIMES his members counted more than 200 bodies of suspected insurgents in one area where the fighting took place, and said there would be more bodies in the bush.

“We have counted 207 dead members of Boko Haram in our area, Jiddari-Polo, alone. Many others are being killed in the bush because the fighter-jet is still shelling them, and some of our members have accompanied the soldiers in pursuing them,” Mr. Abdullahi said.

The group said the figure comprised of the attacking members of the Boko Haram and the other members freed from the military cells within Giwa barracks.

Residents had earlier described as encouraging the sight of youth in their thousands storming the neighbourhoods of the attacks with clubs, spears, bows and arrows, and machete, searching for Boko Haram members.

Another member of the civilian-JTF, Isa Maikati, said his group arrested many of the attackers and handed them to soldiers. Those who tried to fight back, were lynched, he said.

There were reports at least five soldiers, among them a woman, were killed in the attack, but the military did not confirm that claim.

The attack, the first of its kind in that part of Maiduguri city since the beginning of the Boko Haram insurgency in 2009, started at about 7:30 am and continued until about 12 noon.

Hundreds of insurgents, dressed in military fatigues, struck at the barracks, the university and other neighbourhoods of the city.

The military said its forces successfully repelled the onslaught which was targeted at freeing detained Boko Haram members. An airforce jet hovered around the city for hour, dropping bombs at targeted areas and killing many of the insurgents, witnesses said.

There were reports of civilian deaths, although the reports were not confirmed. One resident of Fori, Babaji Adamu, said the aerial bombing destroyed many houses and killed a girl who was hiding with the parents in a house.

Witnesses said one student of the University of Maiduguri was killed, while three others were seriously injured as stray rocket bullets landed in in the densely populated areas of the campus.

The Director of Information for the school, Ahmed Muhammed, said there was no attack or explosion on the campus.

“What people heard or saw were bullets from the area of the attack that fell into our campus,” he said in a telephone interview.

The attack came days after the defence headquarters said Nigeria’s newly-appointed chief of army staff, Major General Kenneth Minima, had relocated temporary from Abuja to Maiduguri to help oversee the government’s response to attacks by the deadly sect.

It was not clear whether Mr. Minimah was in the town when it came under attack. There were no report of his visiting any of the affected areas, or meeting with the media.

Calm returned to the city by evening, as members of the Civilian-JTF took to the streets singing victory songs and chanting anti- Boko Haram slogans.

Governors pledge to draw youth back to farming