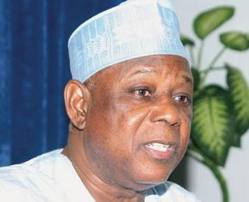 A meeting called to resolve an embarrassing row between Nigeria’s defence minister, Aliyu Gusau, and the defence chief, Alex Badeh, ended in a deadlock Thursday after the two officials stuck to their claim to superior authority, government sources said, fuelling concerns about the likely implication of the impasse on government’s campaign against extremist sect, Boko Haram.

Officials briefed about the meeting said Mr. Gusau insisted on meeting directly with military chiefs – a demand that originally sparked the row; and Air Vice Marshal Badeh refused to apologise to the minister.

“No progress was made at today’s meeting,” a presidency source said Thursday. “We are still where we were on Wednesday. Gusau is insisting that he must meet directly with the army, navy and airforce chiefs. He also wants the chief of defence staff to apologise to him.

But the minister and the chief of defence staff have been locked in a rare power tussle lasting days over a demand by Mr. Gusau to meet directly with the chiefs of army, navy and air force. He wants to give them operational directives, sources close to him said.

Air Vice Marshal Badeh says the minister lacks such powers under the Nigerian constitution and Armed Forces Act. Any official meeting with the commanders, or operational instructions to them, must be routed through the defence chief, AVM Badeh insists. The only exception to that law is the president who is the Commander-in-Chief.

The squabble climaxed Wednesday with intense speculation of Mr. Gusau’s resignation, which the government denied.

Officials told PREMIUM TIMES the government scrambled a mediation effort on Thursday, on the instructions of Mr. Jonathan who was visiting Katsina state to commission government projects.

The meeting, convened by the president’s Chief of Staff, Jones Arogbofaat, had in attendance Mr. Gusau, AVM Badeh, Minister for State, Defence, Musiliu Obanikoro, and the permanent secretary of the ministry, Aliyu Isma’ila.

At the meeting, government insiders said, Mr. Gusau insisted he will have to meet directly with the heads of the three services, prompting concerns at the meeting about why the new minister would be bent on a move considered clearly beyond the scope of his powers.

The officials who spoke said when the defence minister, Mr. Badeh, was asked to apologize to Mr. Gusau, he said that could only be done to the extent that he did not make his position clear. But he vowed not to withdraw or apologize on the substance of his stand that the minister cannot meet with the service chiefs or give them operational orders as he lacks the powers to do so.

In his earlier letter to President Jonathan, Mr. Gusau described the chief of defence staff as being “rude”.

According to insiders knowledgeable about the communication, while the retired general did not expressly submit a resignation letter, he made it clear to the president he will not work with military officials he considered “insubordinate”.

Under Section 217 of the Nigerian constitution, and Section 7 of the Armed Forces Act, only the president has the powers to issue directives to the military chiefs. Were he to delegate them, only the defence chief, is recognized by law.

But analysts also point to the constitutional provision allowing the president to delegate his powers to the ministers.

After sending a letter of complaint to the President on Tuesday, Mr. Gusau refused to attend the  weekly Federal Executive Council meeting, triggering speculations he had quit the cabinet.