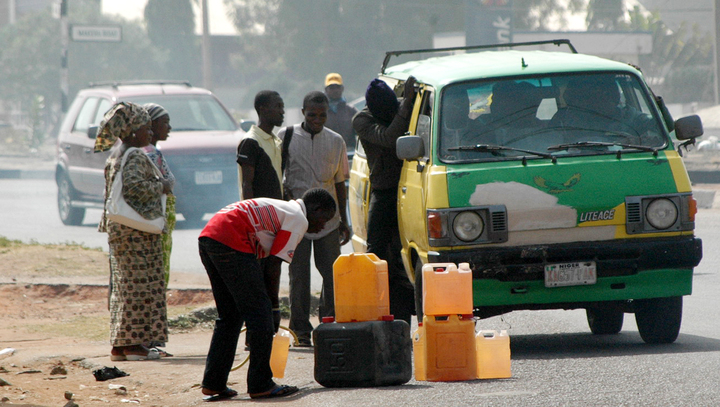 Black market sellers sell fuel for as high as N200.

The ongoing shortage of petrol in Jos and other parts of Plateau State has forced many commercial and private motorists off the road.

The ever busy major highway at the heart of the state capital, Jos, between Maiyango and Nasco Group of Companies at Old Airport Road, was near-deserted on Thursday morning. However, the fuel scarcity has given room for free flow of traffic on usually congested major roads.

Long queues were visible at most filling stations where petrol was being dispensed. Some filling stations have allegedly gone as far as adjusting their pumps to the new illegal prices of between N150 and N160.

More pertinent is the fear among consumers that the petrol currently being sold, especially at “black markets” may be adulterated. Black marketers, who sell in Jerry-cans, are reportedly doing brisk business as many car owners feel they have no choice but to patronise them.

A commercial motorist, Peter Dalong, who plies Bukuru Terminus route, said he got his fuel Wednesday from a road side seller – black market – at N200 per liter.

“I cannot queue for close to 12 hours to buy fuel. All I do is to get the available one, no matter the cost, just to keep life going. I have no other business than transportation,” Mr. Dalong said.

Another motorist, Azi Adamu, who said he was a civil servant told PREMIUM TIMES that he could not afford to buy fuel at N150 Naira from the “black marketers” and had therefore parked his car.

“I decided to park my car due to lack of fuel. As a low income earner, how can I buy fuel at N150 per liter; it has no economic value to me. So, I let the car be at the moment. When the fuel distribution normalises, I shall return it to the road.”

Several motorists at a queue at the major NNPC Mega-filling station along Sharazat Dogonkerfe-Custom House Road said they had been there since 4a.m.

A private car owner, Awal Yusuf, who got fuel at about 11:30 a.m. claimed he had been queuing since 3:00 a.m. Thursday morning.

“I have been on this queue since 3:00 am today. I just got the fuel. Even though it took me a long time, I’m happy I got it at government approved price of N97 per liter.”

However, transport fare within Jos still remained as before but with fewer commercial motorists plying the routes.

On a visit to the NNPC depot in Jos on Thursday, PREMIUM TIMES noted that more than 15 tankers were awaiting approval to transport fuel to various destinations within the state. However, officials of the NNPC refused to speak on record on why the tankers were being delayed at the depot.