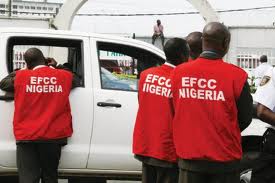 The suspects all opposed the admissibility of the documents.

A Federal Capital Territory, FCT, High Court on Thursday admitted the EFCC`s analysis of cheques allegedly used by Esai Dangabar, a former Director of the Police Pension Board, and five others, to commit the N20.8 billion fraud.

Mr. Dangabar is standing trial alongside Atiku Kigo, Inuwa Wada, John Yusufu, Veronica Onyegbula and Sani Zira. They are being prosecuted by the Economic and Financial Crimes Commission, EFCC.

In his ruling, Justice Husseini Baba-Yusuf, held that the document, which was sought to be tendered by the prosecution counsel, was fully certified and not a hear-say as alleged by counsel to the defence.

Mr. Baba-Yusuf said that the analysis of the withdrawal cheques and a copy of certificate from the EFCC had substantially complied with section 84 of the Evidence Act.

The judge admitted the documents in evidence and marked as exhibits P6A and P6B.

At the last adjourned date on March 11, the EFCC Counsel, Rotimi Jacobs, craved the indulgence of the court to tender the analyses of the withdrawal cheques and certificate from EFCC in evidence.

Mr. Jacobs submitted that the argument of the defence should not stand, arguing that the documents substantially complied with the provisions of the act. He said they should be admitted in evidence “because the document contains the stamp, date and signature of the investigating officer”.

However, both counsel to the defence opposed the admissibility of the document.

Counsel to Mr. Kigo, Adegboyega Awomolo, also opposed the admissibility of the document.

Mr. Awomolo argued that the document sought to be tendered was a reproduction of the First Bank document. He said that it was a photocopy of a document emanating from EFCC, which he said, was a public institution.

He further argued that the document, which was computer-generated, did not meet the requirements of certification based on the provisions of the evidence act.

He, therefore, urged the court to reject the document.

Also, counsel to the second accused, Lateef Fagbemi, urged the court to reject the document.

He said it was mandatory in the act for the certification of every document to be admitted in evidence.

The Counsel to the third accused (Mr. Wada), Hasan Liman, also objected to its admissibility.

Mr. Liman argued that before any document was admissible in law, there must be strict adherence to the provisions of the act.

He urged the court to apply section 85, sub-section 5 of the act, dealing with strict adherence to the law in admissibility of documents.

He submitted that the witness did not comply strictly with the provisions of that section, adding that being a public document; it ought to be strictly certified.

“I submit that the witness did not convince the court whether there was intervention and whether the computer did not break down, whereby some information will be missing in the process.”

He said that only the first and last pages of the document were certified, adding that it contravened sub-section 5 of the evidence act.

The judge adjourned the case to March 17 for continuation of hearing.