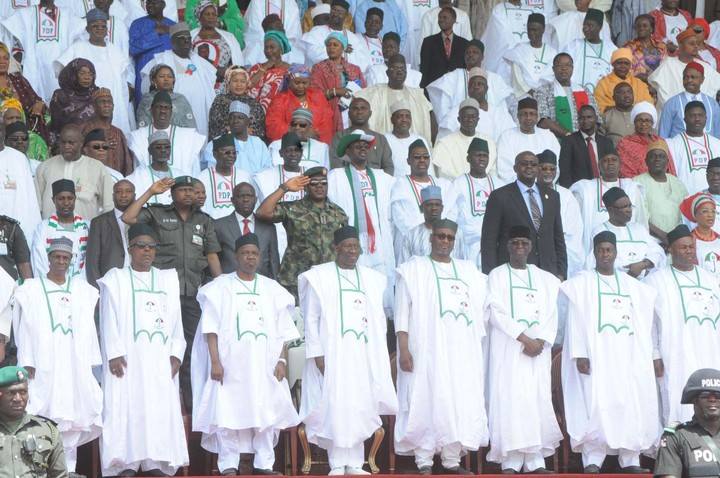 The governors lauded Jonathan for citing federal projects in the zone.

The Peoples’ Democratic Party, PDP, governors in the North-West geo-political zone, on Tuesday assured President Goodluck Jonathan that they would deliver the zone to the party in 2015.

The governors gave the assurance in Kaduna during the North West zonal rally of the party.

Four of the seven states in the zone are governed by PDP governors. They are Kaduna, Katsina, Kebbi and Jigawa States.

Sokoto, Kano and Zamfara states are ruled by the All Progressives Congress, APC.

Both Sokoto and Kano were PDP states until last November when their governors, Aliyu Wamakko and Rabi’u Kwankwaso defected to the APC.

At the rally, the Kaduna State Governor, Mukhtar Yero said its theme, “Unity’’ had brought together diverse peoples from various parts of the country.

He assured Mr. Jonathan that the state would support him at all times and asked him to assist the zone with more projects.

Mr. Yero commended the federal government for executing other projects in the state including the Zaria water works and Abuja-Kaduna rail line.

The Kebbi State Governor, Saidu Dakingari lauded Mr. Jonathan for initiating and completing several development projects in the zone and assured him of their support.

The governor of Katsina State, Ibrahim Shema described the PDP as “the only hope’’ for Nigeria and that the party had succeeded in unifying the diverse peoples of the country.

On his part, the Deputy Governor of Sokoto State, Mukhtar Shagari expressed appreciation to Mr. Jonathan for donating N250 million to victims of a recent fire incident in Sokoto.

The newly-appointed Minister of Foreign Affairs, Aminu Wali, who is also the leader of the PDP in Kano State, said the state would ensure that the party emerged victorious in 2015.

The Minister of State for Works, Bashir Yuguda expressed appreciation to President Jonathan for embarking on various development projects and donating N800 million to victims of lead poisoning in Zamfara State.

The Chairman of the PDP Governors Forum, expressed joy at the huge turnout of the people of the zone at the rally, saying it was an indication of the support the party enjoyed in the geo-political zone.

Mr. Akpabio, who is the governor of Akwa Ibom State, said the rally was organised to sensitise the people on the various achievements made by the party since its inception.

Missing Malaysian Plane: No sightings yet as search widens – Police