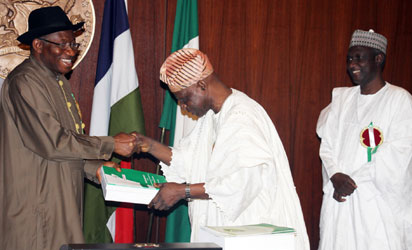 The former council chairmen say their list of representatives, submitted to the SGF, was manipulated.

Former chairmen of local government areas in Nigeria under the aegis of Former Elected Local Government Chairmen Association, FELGOGAS, have protested nominees listed as its representatives at the proposed National Conference.

Ahead of the inauguration of the conference, the federal government last Thursday released the names of 484 of the 492 delegates that would be in attendance.

The All Progressives Congress, APC, is yet to nominate its two representatives at the conference. Also, Rivers, Delta, Oyo are yet to fill all their slots just like the Forum of Former Governors and Academy of Social Sciences, all of which have one slot each.

However, the group has disowned the names released by the Office of the Secretary to the Government of the Federation, saying they were not the ones it forwarded.

In a letter dated March 7 and signed by its National President, Iliyasu Danmusa, the group demanded that the names released be replaced by those it sent in an earlier letter to the SGF, Pius Anyim on February 7.

It alleged that the list it sent to the SGF was manipulated and that the nominees were imposed on the association, which was registered with the Corporate Affairs Commission, CAC.

The March 7 letter titled “Reminder/Observation” which was also signed by the National President of FELGOCAS said: “Reference to our nomination of national delegates to the National Conference representing our association of Former Elected Local Government Chairmen which was submitted to your office on 12th February, 2014 and acknowledged.

“See attached acknowledgement copy but to our dismay the published names in today publications was not reflection of our submissions.

“We are the legitimate registered members under former elected local government chairmen association (FELGOCAS) with the Corporate Affairs Commission. See attached certificate with the CAC.

“We hope our reminder and observation is treated accordingly.”

Speaking on the issue, Mr. Adekoya, a former chairman of Kosofe local government area in Lagos state, said members of FELGOCAS would not condone the manipulation of the delegates list.

He said the association would do everything legally possible, including mobilization of former and incumbent council chairman, to protest hijack of the delegates list.

Mr. Adekoya, who is also the FELGOCAS National Vice chairman (South West) explained that there was only on legally recognized umbrella organization of former elected council bosses in the country and wondered where the office of the SGF got the list it published.

He said, “We don’t have two registered association of former elected local government council chairmen in the country and the list forwarded to the office of the SGF was approved by both the Board of Trustees and National Executive committee of FELGOCAS, so who submitted the list of delegates published.”

“Were the delegates to represent other associations like the labour movement, Nigerian Bar Association, civil society groups handpicked by unknown person in the SGF’s office? We will not take this and we are ready to mobilize all former and incumbent council chairmen to protest this manipulation.”