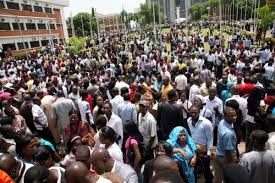 Mr. Duru-Iheoma said this on Thursday in Abuja when he appeared before the House of Representatives committee on Population to defend the 2014 budget of the commission.

He said that the commission requested for N34.56 billion as capital allocation in the 2014 budget, out of which the Budget Office approved N6.2 billion.

He said the amount approved by the Budget Office was inadequate to carry out activities for the successful conduct of the 2016 census.

He said construction of ICT centres across the 36 states of the federation would gulp N5.7 billion. He said the Budget Office allocated only N203 million for the ICT centres.

He said that there was need to refurbish and equip NPC offices across the states.

He appealed to the committee to intervene, adding that the N203 million allocated by the Budget Office would not be enough to construct the ICT centres.

Rep. Abdulrazaq Zaki (PDP, Bauchi), the acting chairman of the committee, said the committee would intervene where necessary.