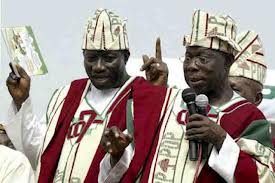 The president welcomed defectors to the PDP.

President Goodluck Jonathan on Monday urged Nigerians to continue to support the Peoples Democratic Party, PDP, saying the ruling party remains the only political platform through which any citizen can fulfil his political aspirations without let or hindrance.

Speaking in Ilorin, the Kwara State capital, during a rally organised by the Kwara State chapter of the PDP, Mr. Jonathan said his party has no political godfathers and demi-gods capable of hindering elected or appointed officials from serving the people.

“It is only in PDP that people like me can become president,” Mr. Jonathan said in a speech delivered extempore. “PDP is not owned by any individual. We don’t have dictators. No more imposition. No godfathers. We don’t own the country. We are only serving the people.”

After welcoming Gbemisola Saraki, a former senator, Dele Belgore, and other defectors into the party, Mr. Jonathan repeated those sentiments, and then added, “We don’t have demi-gods.”

He also told the crowd that the PDP remained the only party that could liberate the people of Kwara from political oppression.

“In Kwara, it is the PDP that can give you what you want,” President Jonathan said. “This is a liberation party. When you are elected or appointed to office, this party allows you to do the work based on your conscience, without being remote-controlled by anybody. You don’t have to serve demi-gods.”

The Ilorin rally was organised by the PDP to welcome new defectors from the All Progressives Congress and Action Alliance.

Ms. Saraki, who contested the last governorship election on the platform of Action Alliance, and Mr. Belgore, who ran on the platform of the Action Congress of Nigeria (which is now part of the All Progressives Congress, APC), are moving into the PDP just a few months after Bukola Saraki, a senator, and the sitting governor, Abdulfatah Ahmed, and their camp defected to the APC.

Mr. Saraki and Ms. Saraki are siblings and fell apart prior to the 2011 elections. Both were before then elected as governor and senator respectively under the PDP.

Monday’s rally was attended by leading chieftains of the PDP at state and national levels.