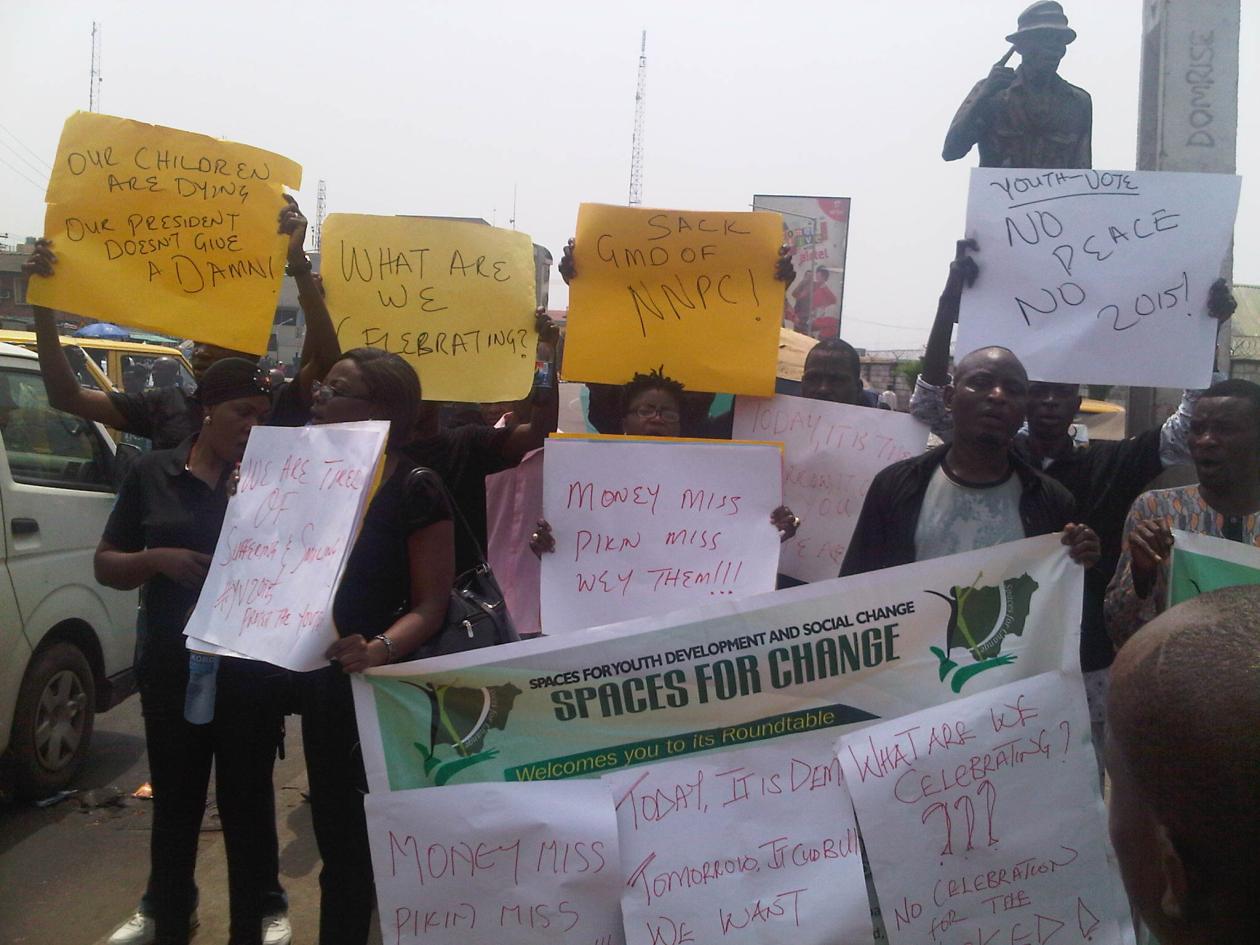 The protesters also condemned the corruption in the oil industry.

Dozens of protesters marched in Lagos, Friday, demanding justice for the murdered school pupils in North-Eastern Nigeria and the alleged missing $20 billion in the Nigerian National Petroleum Corporation, NNPC.

The protesters, dressed in black outfits, converged at the statue of the late educator and philanthropist, Tai Solarin, in Yaba, and chanted solidarity songs as they marched to Tejuosho market and back to Yaba bus stop.

Victoria Ibezim-Ohaeri, who led the protest, said that they were sensitizing the public and demanding for an improvement in “governance architecture.”

“So much blood has been spilled in the last few days in unrestrained terrorist attacks and bombings that have disproportionately targeted young Nigerians in the north-eastern region of the country,” said Ms. Ibezim-Ohaeri, who heads Spaces for Change, a rights advocacy group.

Last Tuesday, at least 29 students of the Federal Government College, Buni Yadi, Yobe State, were killed by gunmen suspected to be Boko Haram insurgents. Though the military puts the casualty figure at 29, the victims are reported to be over 50.

“Till this day, no one knows their whereabouts or what has happened to them,” Ms. Ibezim-Ohaeri added.

The protesters bore placards inscribed with ‘Our children are dying, our president doesn’t give a damn;’ ‘What are we celebrating?’ ‘Sack GMD of NNPC;’ ‘Money miss, pikin miss, wey them? We want justice;’ ‘Missing $20 billion, N32 trillion can create jobs, build roads, build schools, build hospitals, reduce infant mortality;’ amongst others.

Ms. Ibezim-Ohaeri said that the $20 billion oil proceeds which the NNPC has allegedly failed to remit to the federation account had further worsened the security crisis and fuelled widespread discontent among the populace.

“The startling revelations of massive irregularities entrenched in the administration of subsidies on petroleum products have been treated with objectionable condescension, executive levity and indifference to effectively investigate these claims and overturn the lack of fiscal responsibility, accountability and transparency
in oil industry operations which have resulted in high levels of corruption and social inequality,” she said.

A coalition of youths under the auspices of YOUTH-VOTE2015 (YV2015) who also took part in the protest urged politicians and political parties to present a coherent program of action for integrating youth priorities in their political agenda and party ideologies, especially in the area of education, job creation and access to education.

“We are tired of hearing bland promises that no one plans to fulfil, especially as the youth continue to bear the brunt of the massive dysfunction in governance,” the group said.

Ms. Ibezim-Ohaeri urged President Goodluck Jonathan “to take every step necessary” to intensify the search for the 20 young women held captive by Boko Haram insurgents as well as ensure they are safely reunited with their families.

“We emphatically state that every minute these women are held in captivity is a minute too long,” Ms. Ibezim-Ohaeri said.

“We will continue to shout on online and offline spaces, demanding compensation for affected families; accountability and social justice, until we are assured that these innumerable tragedies befalling our nation are never repeated,” she added.