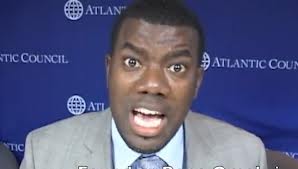 Mr. Omokri has the reputation of being government’s online marksman
Reno Omokiri, a close aide of Nigeria’s President Goodluck Jonathan, is wound up in a massive scandal after the digital footprint of a slanderous write-up against the recently suspended governor of the Central Bank, Sanusi Lamido, was traced to his computer.

Mr. Omokri, Special Assistant to the President on New Media, is believed to have used a pseudonym, Wendell Simlin, to circulate an article that tried to link the recent spike in Boko Haram attack to the suspension of the CBN governor, Lamido Sanusi.

The article tried to use a purported historical framework to draw contextual relationship between the suspended CBN governor and Boko Haram attacks.

“Given the quantum of funds that were appropriated by the Sanusi-led CBN on non banking related activities and donations, and the strong desire that he and Alhaji Umaru Abdul Mutallab have for proselytizing Islam as well as their circumstantial links to terror (Sanusi via Gideon Akaluka and Mutallab via his son) it is not such a leap for them to facilitate the activities of terrorists,” the article read in part.

The article was circulated to bloggers and journalists on Wednesday with the third party email address, wendellsimlin@yahoo.com, but an analysis of the document’s metadata revealed that Reno Omokri authored it.

The document’s digital signature shared a 100 percent resemblance with that of others PREMIUM TIMES had received from Mr. Omokri in the past.

The document was created by Mr. Omokri or someone else who used his Hewlett Packard computer at 10:01 on Wednesday. Sixteen minutes after it was created, the document was printed and revised once before it was sent out at 11:54 using the Wendell Simlin’s email address.

The revelation of the potential scandal angered Nigerians on social media with many calling for his sack.

Mr. Omokri who claims to be a pastor, often posting gospel tips on twitter, is criticized for failing morally and acting criminally by
trying to blame Mr. Sanusi for terrorist killing less than 48 hours after members of the Boko Haram sect murdered young students in their  hostels.

“If it is true that this guy tried to capitalize on this tragedy by forging documents to implicate somebody else, pressure should be
placed on the presidency to fire him,” Pius Adesanmi, a professor of english and respected social critic said on his Facebook page.

Mr. Omokri has the reputation of being government’s online marksman. He is believed to be President Jonathan’s coordinator of internet trolls and  leads the government’s social media onslaught on opposition parties and critics of the administration.

“Some of us who know him know he establishes spurious online accounts to malign opposition,” Tolu Ogunlesi, a journalist, said.

“It is something we know he does,” another blogger said.

The “grave” attitudinal deficiency exposed by Mr. Reno’s email shows a great danger ahead of Nigeria’s 2015 elections, critics say, arguing that it is an indication that the President Goodluck Jonathan-led administration would rather reap politically from the killing than put an end to it.

“Rather than solving the Boko Haram problem, he is using it for political gains,” Mr. Fawehimi said. “It is quite low and depressing.”

Mr. Omokri is yet to respond to PREMIUM TIMES’ request for comments as at the time of publishing this report.

Aso Rock spokespersons, Reuben Abati and Doyin Okupe, also did not answer or return calls made to them repeatedly by our reporter.