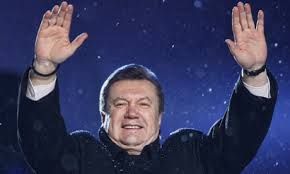 The parliament passed a resolution to dismiss Yanukovych from his post

“I can say that Yanukovych is a suspect. He was put on the wanted list. He is wanted for mass murders of people with aggravating circumstances,” he told reporters.

When asked if Yanukovych had been arrested, Makhnytsky said “this is the remit of the investigation department”.

Meanwhile, the Ukrainian parliament approved a bill earlier on Tuesday to bring a case of alleged massacre of protesters to The Hague-based International Court of Justice.

In a statement, the parliament requested the court to identify and bring to justice those Ukrainian officials involved in the crackdown on protesters.

The statement also said that the use of water cannons by police against protesters at temperatures of minus 10 degrees Celsius, constituted torture.

On Saturday, the parliament passed a resolution to dismiss Yanukovych from his post and set an early election for May 25.

The whereabouts of Yanukovych are still unknown after he reportedly left the capital city late Friday to take part in a regional meeting in Kharkov near the border with Russia.

According to local media reports, the ousted president may be residing in the Crimean peninsula in southern Ukraine or has left the country.

The Interior Ministry on Monday issued an arrest warrant for Yanukovych and his close allies over the protests, which began in November 2013 to back the country’s European integration.