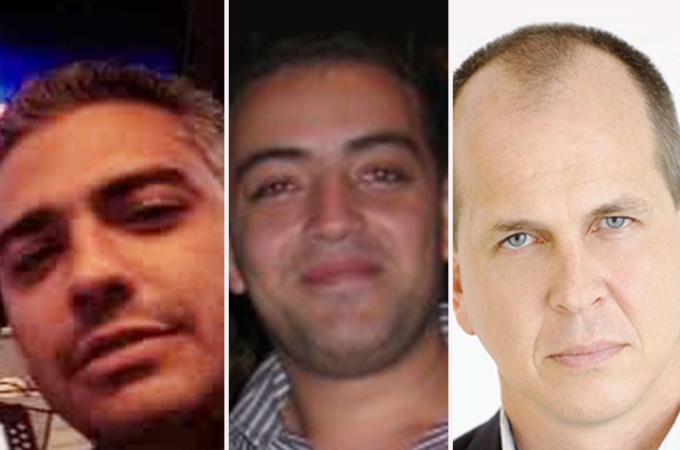 The journalists were accused of spreading falsehood and having links with the Muslim Brotherhood.

The Aljazeera news network has continued to protest the detention of three of its journalists, Peter Greste, Mohammed Fahmy, and Baher Mohamed who were detained by Egyptian authorities on December 29, 2013. A fourth journalist with the Al Jazeera Arabic, Abdullah El Shamy, has been imprisoned since August 14, 2013 and has now embarked on a hunger strike in protest.

The Egyptian authorities accuse the journalists of peddling “false news” and having links to the Muslim Brotherhood, which was declared terrorist organization in December by Egypt’s military-backed government since the ousting of democratically elected president, Mohammed Morsi.

Al Jazeera denied the accusations, so did the journalists who appeared in court on Thursday, February 21, 2014. They told the court they were only doing their jobs.
The journalists complain of the tortuous mental and physical state of the prison, but hope justice will prevail and they will soon be released.

In a press release made available to PREMIUM TIMES, Al Jazeera said “events supporting Al Jazeera’s detained journalists in Egypt are planned in over 30 countries for this Thursday, 27 February 2014”.

They are perturbed about the state of their journalists especially Abdullah El Shamy who has been on a hunger strike since January 23, 2014.

In solidarity with the incarcerated journalists, the international media, press freedom organisations, including the Committee for the Protection of Journalists, CPJ, have lent their voice and signed a
petition against the continued detention of the journalists.

Aljazeera is grateful for this, and quotes its general director, Mostefa Souag, as saying, “We truly appreciate the solidarity from everybody right around the world.”

“The pressure, support and calls for our colleagues to be released have continued to keep the story in the news. The Global Day of Action is about the freedom of the press; it is about objective reporting and
ensuring journalists cannot be gagged or silenced. We ask everyone to contribute to the Global Day of Action on Thursday. Journalism is not a crime.”

It also began a social media campaign on February 1, 2014, with the hashtag #FreeAJStaff. It has gone viral worldwide, with about 250 million impressions on Twitter.

Egypt was ranked the third worst place for press freedom in 2013 by the CPJ, which says Egyptian authorities are constantly intolerant of dissenting views.

Al Jazeera has urged people from all backgrounds to join the rally and support the social media campaign using the hashtag #FreeAJstaff.

“To build on the online #FreeAJstaff campaign, Al Jazeera will be using Thunderclap, which will allow people to pledge a Tweet, Facebook post, or Tumblr post containing the same message that’s unleashed, all at the same time, throughout the world.

For more information on the Global Day of Action, visit here.

For more details on Thunderclap:

What happens: At 14:00 GMT on Thursday, 27 February 2014, Thunderclap will post simultaneously to the hundreds of Twitter and Facebook accounts supporting the campaign in a truly global action.”