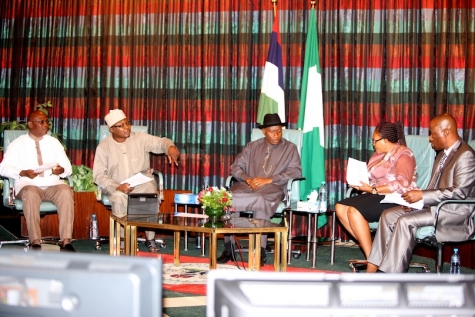 The president had a Presidential Media Chat.

President Goodluck Jonathan descended heavily on the Borno State Governor, Kashim Shettima, describing as “unfortunate” a statement credited to the governor that the Boko Haram sect was more equipped than the Nigerian military.

He, however, said he had no plan to replace the governor with a military administrator as being speculated.

Following the declaration of a state of emergency in three north eastern states- Borno, Adamawa and Yobe- the armed forces had deployed troops to the states to contain the insurgent activities of the Boko Haram.

Mr. Shettima, apparently frustrated by the rising incidents of killing in Borno State, had told journalists after a meeting with the Mr. Jonathan at the Aso Rock Villa, Abuja last week that the dreaded sect was better armed than the armed forces.

He said the military as currently constituted and armed  could not defeat the sect.

“Boko Haram are better armed and are better motivated than our own troops,” the governor had said. ‘Given the present state of affairs, it is absolutely impossible for us to defeat Boko Haram.”

However, fielding questions on Monday from a four-member interview panel during the sixth presidential chat, Mr. Jonathan suggested that if he withdrew the military for one month from Borno State, the governor would not stay in the state.

“The issue of the governor of Borno State, the statement is a bit unfortunate. I don’t expect a governor to make this kind of statement and if the governor of Borno State felt that the Nigerian armed forces are not useful he should tell Nigerians, I will pull them out for one month whether he will stay in that his Government House. But, if he thinks what he said is correct then I will pull out the armed forces for one month.

“A governor should be mindful of what they say. Yes there are issues, but no matter how frustrated you are you don’t make this kind of statement.

Mr. Jonathan debunked claims that government’s efforts were not yielding result, saying the nation would get over the activities of the insurgents.

According to him, security operatives were working hard though people would not always consider the successes being recorded by the military in the north east region.

He said, “I will say that we are worried, worried in the sense that we are not happy when we hear that people have been killed, not just one person but the number that we read in the newspapers.

“So, it is not as if we are not worried. We are working very hard and we will continue to work hard. We have successes. In this kind of situation people don’t want to hear about any death. So nobody talks about the successes, but the negative ones are the issues.

“It is not as if the state operatives are not working. The Boko Haram attacks started from Abuja, these massive bombings – UN Building here, the Police headquarters was bombed here in Abuja, a market was bombed. So, if the security was not working hard I think we would have even felt it in Abuja. So we are working….we will get over it.”

Mr. Jonathan also said that the proposed National Conference would commence on March 10, though its principal officers would be named a week earlier.

The Federal Government had three weeks ago unveiled the modalities for the conference, first announced in Mr. Jonathan’s October 1 Independence Day broadcast to the nation.

The Secretary to the Government of the Federation, Pius Anyim, who announced the modalities, said altogether, 495 delegates would attend the conference earlier scheduled to commence this month.

The modalities were based on the recommendation of the 13-member Presidential Advisory Committee on National Dialogue chaired by former Senator Femi Okurounmu, which was appointed by the government to package the conference.

Mr. Jonathan said government would announce the chairman, deputy chairman, the secretary and other key administrative staff on March 3rd and he would formally inaugurate the confab on March 10.

He restated that the confab would not discuss the disintegration of Nigeria, saying he would not preside over such fate befalling on the country.

The president disclosed that when the Okurounmu Committee toured the country to collate memoranda from Nigerians, it was only person that “suggested a memo on disintegration.”

He also explained that the conference was not being organised to prevent the country from breaking, adding that its outcome would not impact significantly on his administration.

Mr. Jonathan said he was attending the rallies organised by his party, the Peoples Democratic Party, PDP, because as the leader of the party, he wants to lead it to victory.

On his political future, the president said he was being very careful about announcing if he would contest the presidential election or not so that he would not create tension in the country,

The Good and the Bad People’s Party, By Bolaji Eletta

Why Lamido Sanusi should end up in Kirikiri, By Femi Aribisala