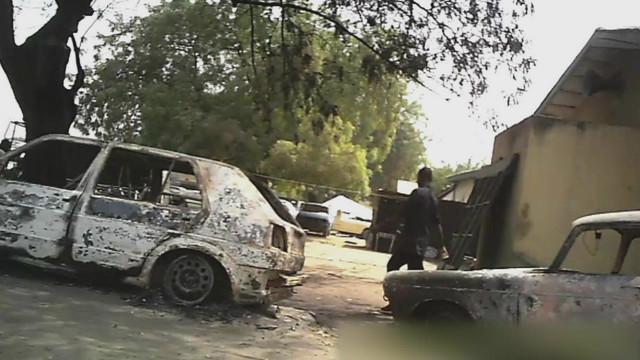 A soldier was on Tuesday night killed in Buratai Village of Borno State during a shootout as gunmen suspected to be Boko Haram attacked and torched the country home of a Nigerian Army chief, Tukur Buratai, security sources and witnesses said.

According to eyewitness accounts, the gunmen invaded the village at about 7 p.m. and moved directly to Mr. Buratai’s home. They opened fire on soldiers guarding the building.

“There was a serious shootout between the attackers and the military personnel which led to the death of a soldier”, Mari Ibrahim, a businessman in the area, told journalists.

“The suspected terrorists took the soldiers by surprise when they attacked the general’s mansion in the village at about 7 p.m. on Tuesday with exchange of gunfire, but the terrorists overpowered the security operatives using Improvised Explosive Devices, IEDS and rocket propelled launchers. They killed one soldier after setting the building ablaze”.

Buratai Village, which is situated some 215km away from Maiduguri, the Borno State capital, was under similar attack in January during which a prominent businessman there was killed.

The Borno State police commissioner, Lawan Tanko, confirmed Tuesday’s attack; but did not say if a soldier was killed.

“There was an attack in Buratai with minimal damage and the situation has been brought under control,” Mr. Tanko said.

The tragedy of defections and valueless politics in Nigeria, By Udo Jude Ilo

Raped By A Monster Father, By Soyombo Ayomikun