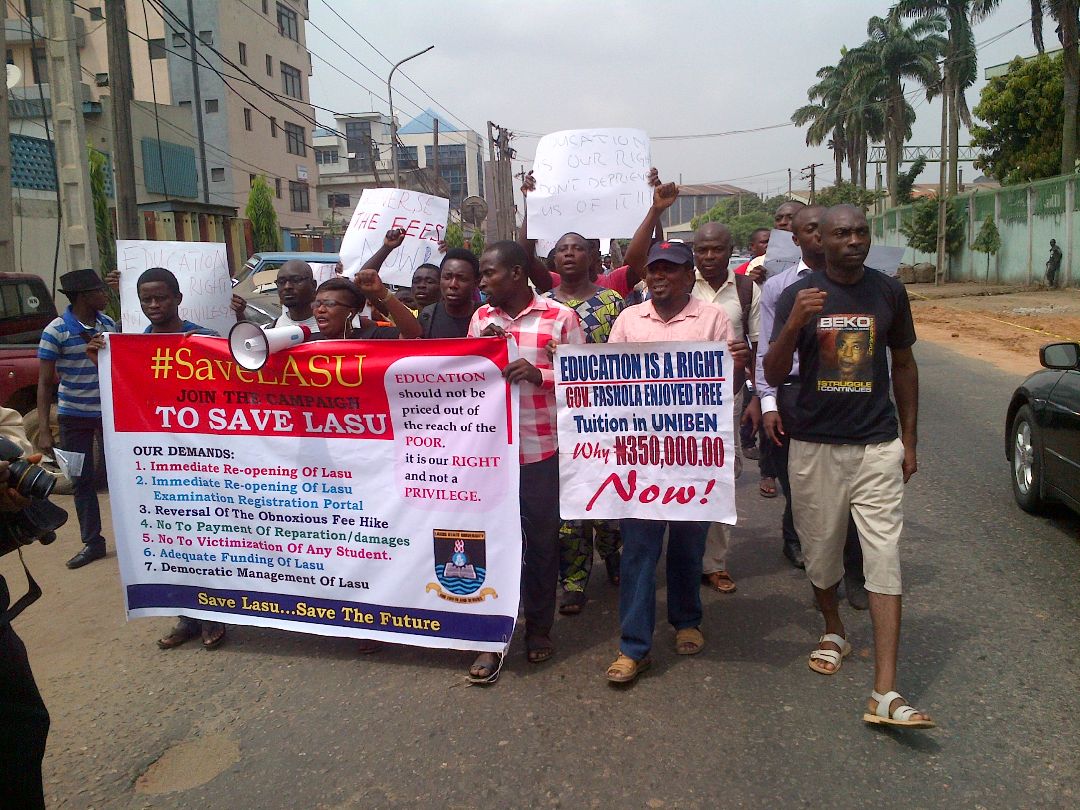 The students demanded a reversal of the hiked tuition fees.

Some Students of the Lagos State University, LASU, on Tuesday submitted a petition to the Lagos State House of Assembly demanding that their institution be re-opened for all the undergraduates.

The school management had announced on Monday that academic activities would resume on February 24, but with the final year students resuming first.

The students, who marched through the city bearing placards and chanting solidarity songs, also demanded the immediate reversal of the “obnoxious” hike in their school fees; reopening of the examination registration portal; democratic management of the school; non victimization or payment of reparation by any student; and adequate funding of the institution.

There were no police officers or patrol vans as the peaceful procession began at the Textile House in Ogba, Ikeja, marched through Agidingbi chanting songs mocking Babatunde Fashola, the state governor, and his All Progressives Congress, APC, party.

One of the songs described the governor as a man with “small brain who had easily forgotten his campaign promises” and the APC as a party of “double standards.”

Dozens of armed police officer, however, were stationed outside the Assembly complex before the protesters arrived. On sighting the students, a uniformed guard at the gate used a padlock to secure the gate.

The leader of the protest, Hassan Taiwo, said that the immediate cause of the January 23 protest by the students was the high-handedness of John Obafunwa, the Vice-Chancellor; while the remote cause was the hike in school fees.

“The protest was peaceful until the campus marshall shot at students and members of the Rapid Response Squad were deployed into the university,” said Mr. Taiwo, popularly called Soweto, the Co-ordinator of the #SaveLASU project. 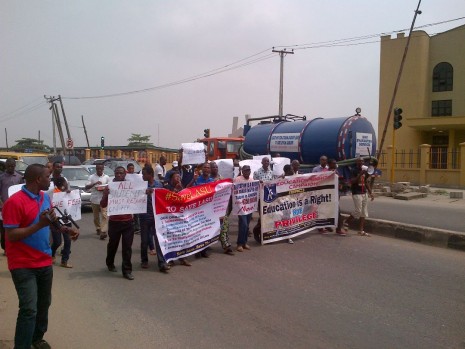 “The students’ movement has always had an agreement with the government, it was an agreement that was reached during the battle against military autocracy in this country, that at no time will the university community be invaded by members of the police force or the military.

“We are therefore amazed that under a progressive government, our university has become a ground for military to shoot at unarmed and innocent students. This is unacceptable to us. And that was what led to the degeneration of the crisis,” Mr. Taiwo added.

The Secretary of the Joint Action Front, Abiodun Aremu, said that the students were not “angry enough.”

“The only thing we want to say here is the need for a larger struggle to save public education,” said Mr. Aremu, whose group also participated in the protest.

“If the students have decided to stage this protest here today, it is for one reason: the hike in tuition fees in LASU is the cause of the problem and the Lagos State House of Assembly has a responsibility to reverse that policy.

“If you say it is not reversible, my own experience in struggle has shown one thing – it is reversible. Some of us are passionate to be here because today I’m not sure there is anybody in the Lagos State House of Assembly that was not a beneficiary of public education,” Mr. Aremu added.

While handing over the petition to Kolawole Taiwo, Deputy Speaker of the House; the students accused the legislators of bias in their verdict on the protest that led to the closure of the school.

In his response, Mr. Taiwo said that it was a wrong impression to state that the House blamed only the students for the crisis in the institution.

“It was at that sitting that we instructed that the portal must be reopened. We really want to get to the root of this thing,” said Mr. Taiwo.

The Deputy Speaker’s attempts to explain the reason behind the increment of the university’s fees were met with shouts and chants of solidarity songs by the students.

After more fruitless attempts at explanation, Mr. Taiwo collected the petition from the students and promised that the House would look into it.