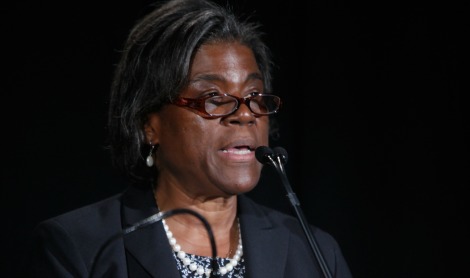 The U.S says the tribunal would serve as deterrent to election violence.

The U.S. Assistant Secretary of State for African Affairs, Linda Thomas-Greenfield, on Monday, urged the Federal Government to establish an electoral offences tribunal before the 2015 general elections.

She made the call in Abuja at the opening of the Nigeria-U.S. Bi-National Commission, BNC, working group’s meeting on good governance, transparency and integrity.

Ms. Thomas-Greenfield, who led a 23-man team to the third meeting of the group, said the U.S. believed the tribunal would serve as deterrent to election violence.

“We stand with the Nigerian people who say loudly that they will not accept electoral tampering, overly heated rhetoric, vote selling or buying and violence,” she said.

“I have heard my Nigerian friends say, repeatedly, that anyone who engages in such elections chicanery should be held accountable and they are right.

“We hope that our continued electoral assistance will give the utmost support to the Nigerian people because they deserve nothing less than elections that reflect their will.”

The Chairman of the Independent National Electoral Commission, INEC, Attahiru Jega, has also repeatedly demanded the establishment of an electoral offences tribunal.

The U.S. Assistant Secretary commended the conduct of the Nigeria police and security operatives at the November 16 gubernatorial elections in Anambra.

She said “we have confidence that if the Nigerian police, the military and other security services are allowed to do their jobs professionally as they did in Anambra, elections can be held safely in Ekiti and Osun this year.

“We also have confidence that come 2015, elections in every polling unit in the country will be safe.”

She urged Nigerian electorate to hold politicians, INEC, the media, judiciary and security agencies accountable for free and fair elections.

She also urged Nigerians to “peacefully report to INEC and Nigerian judicial system for resolution as nothing justifies violence.”

The Assistant Secretary of State, who is visiting Nigeria for the third time since her appointment last year as President Barack Obama’s lead diplomat for Africa, said the U.S. and U.K. are committed to promoting credible elections in Nigeria.

She recalled that in the run-up to Nigeria’s 2011 elections, the U.S. and U.K. contributed $31.3 million to strengthen Nigeria’s electoral management body and civil society groups.

“We are proud to support the great electoral success you achieved as a nation and as a people,” she said.

The U.S. envoy reiterated her government’s support to the forthcoming elections in the country, saying it looked forward to working with INEC and other stakeholders.

She said the BNC meeting would discuss how to make Nigeria’s 2015 elections “the most peaceful, free, fair and credible elections in its history.”

In his remarks, the Permanent Secretary, Ministry of Foreign Affairs, Martin Uhomoibhi, said the Federal Government had consistently advocated for peaceful and credible elections, devoid of violence.

He said “in our history as a nation, we have never seen a leader so transparently committed to ensuring a free, credible and fair election as our president.

“The confidence that he reposes on INEC bears eloquent testimony to this conviction and commitment.

“In his May 29 address when he took on the mantle of leadership as president, the president said and I will paraphrase him: “For Africa, the age of liberation and struggle is over.

“What is important to us at the moment is to ensure the entrenchment of sustainable democracy.”

Mr. Uhomoibhi said Nigeria would continue to play a leading role in the consolidation of democracy in the continent, citing the country’s interventions in Guinea Bissau, Mali and Cote d’Ivoire.

On terrorism, the permanent secretary recalled the contents of Nigeria’s partnership with the U.S. government in fighting terrorism.

“Terrorism is evil; it has no religion, no nationality, race, ideology or definition, the only definition we know of terrorism is plain and simple: evil.

“Nigeria is committed to the war against terror, Nigeria will win that fight because Nigerians are peace loving people and have fought for peace since 1960 when we became a nation,” he said.

A 68-man delegation from Nigeria, led by Mr. Uhomoibhi is participating in the two-day BNC meeting.

The Nigerian participants are drawn from government, media and civil society groups.

A communiqué is expected at the end of the meeting.

The BNC was established in 2010 to address a range of shared concerns by both countries, including regional cooperation, security, and counter -terrorism, Niger Delta, energy and investment.

It also has a working group dedicated to agriculture and trade policy.