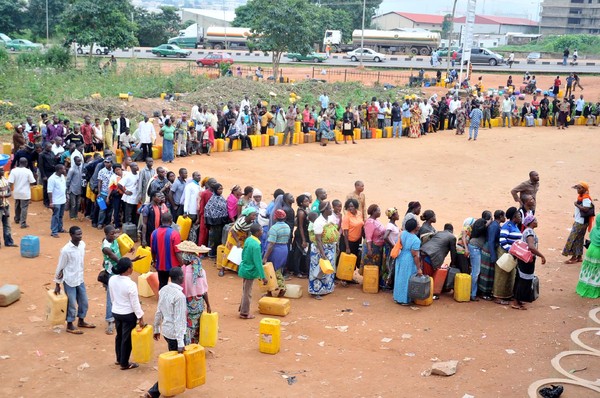 The DPR said the stations bought more kerosene than they sold

The Department of Petroleum Resources, DPR, on Thursday sealed two filling stations for hoarding and diverting 25 truckloads of kerosene.

The stations were sealed during a routine inspection and monitoring of filling stations by the DPR led by its Manager, Downstream Monitoring Operation, Idris Mohammed.

The Zonal Operations Controller, DPR Abuja, Aliyu Halidu, told journalists at the end of the exercise that Sunma filling station was sealed because it violated the rules of the petroleum sector.

The management of the station, according to him, stocked 24 trucks, ranging from 33,000 to 60,000 litres at Giri station, when the station did not have capacity to handle such volume.

He alleged that the station lifted 15 trucks of kerosene within two weeks and discharged only two and diverted 13 other trucks.

Mr. Halidu said the storage capacity of the station was 34,000 litres of kerosene against 684,000 litres it received from the depot within the period.

He said the action was a clear violation of laws and regulations governing procurement and distribution of petroleum products.

According to him, the attempt to divert, hoard and profiteer is viewed by government as sabotage as the station was only licensed to store 34,000 litres of kerosene.

He said Ajfun filling station was sealed for lifting 12 trucks loads of kerosene within 12 days without discharging the content of any of the trucks at the station.

The station, he said, was licensed to store 33,000 litres of kerosene as against 406,000 litres it received within the period.

Halidu said the station did not have dispensing facilities for kerosene, but was accessing the product.

“The two stations remain sealed until they are able to produce the missing trucks of kerosene. It is only then that their suspension would be lifted.

“We will ensure that those products are dispensed to the public at the approved price of 50 per litre. Until that is done they remain under suspension,” he said.

Earlier the Station Manager of the Sunma filling station, John Akor, who did not deny the allegation, said the station only had bulk purchase and not bulk sale license.

He said the product was purchased from a private depot and not NNPC, adding that it embarked on bulk sale to assist other stations that were in need of the products.

Suleiman Hammad, the station Manager of Ajfun, could not explain what happened to the missing 12 trucks, but directed the team to his boss, who he said, had gone to DPR office.

He said his boss would be in a better position to explain what the station was doing with kerosene when it did not have dispensing point for it.

Presidential directives not law, can be disregarded – Petroleum Minister, Alison-Madueke