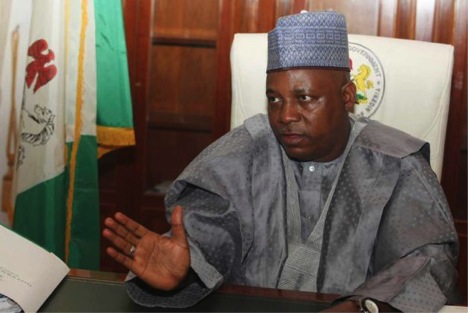 The end may have come to the bickering between the Borno State governor, Kashim Shettima, and his political godfather, Ali Sheriff, after the latter was received by a crowd of supporters in Maiduguri on Sunday.

Messrs Shettima and Sheriff have been on the war path, especially in the last three weeks, over who takes charge of the All Progressives Congress, APC, in the state. The messy brawl resulted in each camp accusing the other of being responsible for the January 14 bomb blast that killed 43 in Maiduguri.

PREMIUM TIMES gathered that the two men met in Lagos on Saturday where top APC leaders and governors intervened in the dispute until it was resolved.

Mr. Sheriff flew into Maiduguri on Sunday in his private jet and was received by a crowd of supporters including National Assembly members, state lawmakers, serving commissioners and former political appointees who served during his eight years stint as the Borno governor.

An apparently elated Borno deputy governor, Zannah Mustapha, later told journalists that “There was never any disagreement between the former governor and my boss, His Excellency Governor Kashim Shettima. It was all the creation of mischievous politicians who sold it to the media where it was scandalised.”

He, however, praised God for the reconciliation over a fight that never was.

“To God be the glory, all is now over about the so-called fight between my boss, Governor Shettima, and former governor Ali Sheriff. People, especially, the small time pelicans usually thrive in promoting disagreements that are never in existence just to advance their selfish needs. But as I am talking to you now, both His Excellency Kashim Shettima and our former governor, Sheriff had on Saturday met and reconciled whatever differences they may have had; and have also agreed to work together more than ever before to advance the cause of APC,” Mr. Mustapha said.

The deputy governor added that no controversy could deny APC its clear chance to win elections in 2015.

“APC has come to stay as the only alternative for Nigerians, and this is making many people uncomfortable, maybe that was why some people are praying that our normal in-house disagreement should not end; but nothing that is political is permanent; we can always disagree to disagree,” he said.

He insisted that major differences do not exist between the two political leaders.

“In politics, if leaders who have strong followers are fighting; and fictitious lies are being cooked and couriered from one end to the other, there is bound to be serious misunderstanding and chaos in the party. But it could be managed if the press do not come in. But in most cases, both sides want to use the press to advance their grievances and at the end it gets out of hand. So the politicians who are assisted by the press are the ones responsible for the little conflict that happened in our party, and thank God it is over now,” said Mr. Mustapha.

The deputy governor also provided a little background about the crisis and how he got involved.

“On the day the former governor was to arrive the state via Gombe Airport, I was specifically instructed by His Excellency to go to Gombe and receive the former governor and even provided his spare official vehicle for me to go and convey Mr. Sheriff to Shani and then to Maiduguri. And as deputy I have no luxury of options whatsoever to turn down the directive of my boss to whom I have a sworn loyalty. If he asks me to travel in the middle of the night to anywhere in the world, I find it duty bound to oblige with topmost alacrity, because he is my boss. I went to Gombe alongside other commissioners to receive the former governor, and from Gombe, to Shani local government where he condoled the family of the late Emir, up to Biu where he passed the night and paid a visit to the Emir, up to Maiduguri. There was never a point or time in which the former governor uttered any word of ill-feeling or negative statement about the governor or the party or the people of Borno State.

“But up in the Maiduguri, the presence of a former commissioner, Muhammed Imam, caused a little confusion, when His Excellency was to go to inspect some facilities at the airport alongside some government officials, but on the way those that were around the airport probably to receive Muhammed Imam, suddenly created some confusion there by trying to embarrass our governor who all the while stood his ground and impressed on his security operatives and followers to remain calm. But some who are not happy with what happened thought whatever happened there was instigated by the former governor. And things went out of hand, and there was almost turmoil. But thank God it is all over now.”

He maintained that he was loyal to Mr. Shettima, adding that lessons have been learnt from the conflict.

“We have learnt the lesson and the lesson is that if there are misconception about anything in politics which tend to threaten our unity as a party, leaders should always come out in the open to explain things because if they fail to do so in time, they cannot control it when their supporters go out of hand,” he said.