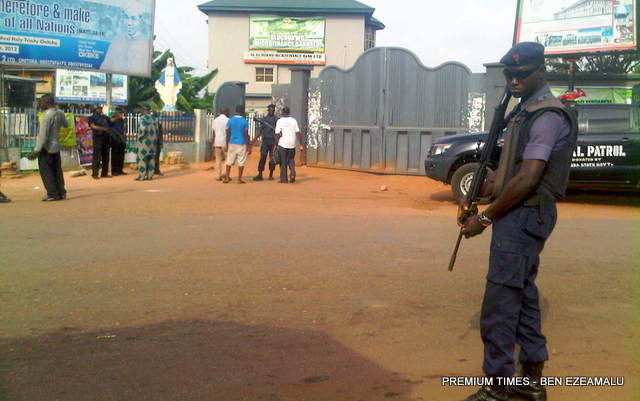 Police ‘mopping up’ arms ahead of #Nigeria2015 elections

The force has suspended the issuance of licence for private arms.

The Nigeria Police said they have started mopping up arms ahead of the 2015 general elections in the country.

Frank Mba, the Force Public Relations Officer, disclosed this in an interview with the News Agency of Nigeria (NAN) in Lagos on Sunday.

He added that the police had placed surveillance on public armouries across the country and the nation’s borders in order to checkmate illegal possession of arms.

He said that many black spots were also being raided across the nation.

“One major factor behind thuggery is the proliferation of illegal arms. As a result of this, we have been mopping up arms across the country,” Mr. Mba said.

He disclosed that many illegal arms had been discovered in Lagos State.

“Police in other states are doing same. We are mounting surveillance on public armouries to check proliferation of light arms in wrong hands.

Mr. Mba said the police had also discovered some factories in Edo, Anambra and other places. Those arms and factories were destroyed, he said.

The police spokesman said that arrangement was on to recover all illegal arms in the country for destruction.

He said the police were collaborating with the military, Department of State Service, Civil Defence Corps, Immigration, Customs and private security organisations to achieve set goals.

“As we speak, the Inspector General of Police (IGP) has placed embargo on issuance of licence to individuals for arms. This is just one way to check arms in the country,’’ he said.

Mr. Mba said the IGP had reduced the use of police escort by politicians and some private persons nationwide.

He said that surveillance had also been placed on politicians and private persons, with a view to checking anyone using police officers without permit.

“We should however note that some people are to be protected by the police because of their position in Nigeria. Even in developed world, the state provides special security for some people’’, he said. (NAN)