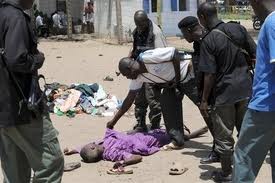 Dozens of people have been killed in clashes in Benue State.

The United States of America has expressed concern over the violence in some parts of Plateau, Kaduna and Yobe states in past few days leading to the death of dozens of people.

The U.S. made its position known on Saturday in a statement by the Information Office of the Public Affairs Section of its Embassy in Nigeria.

“The United States is deeply concerned by separate violent clashes in Nigeria’s Middle Belt region which claimed the lives of scores of innocent civilians on February 4-6. The attacks by gunmen against innocent villagers — including women and children — perpetuate a cycle of inter-communal violence that must be interrupted and eventually halted,” the statement said.

Some of the killings referenced by the U.S. government occurred in Riyom and Wase local government areas of Plateau State where about 54 people were reported killed in separate attacks.

The attacks, which occurred in the middle of the night, also saw several houses burnt by the attackers. Despite the presence of a multi-security task force, STF, in Plateau, since 2008, none of the perpetrators of the recent attacks were arrested.

The U.S. therefore challenged the Nigerian government to investigate the killings and prosecute the perpetrators accordingly.

“We urge the Government of Nigeria to investigate this attack, hold the responsible parties accountable, and work to provide increased security for civilians to prevent future acts like this from taking place,” the statement read.

The statement also challenged governments of the affected states to wake up to their responsibilities of protecting lives and property of citizenry.

“We urge the citizens of Kaduna, Plateau and Yobe states to work toward a peaceful resolution of conflicts and grievances,” the statement said.