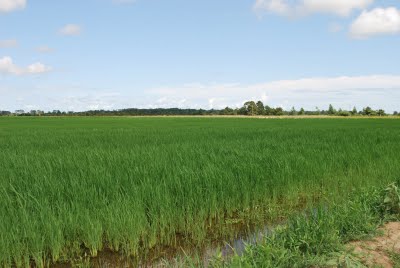 A Rice farm used to illustrate the story

President Goodluck Jonathan on Thursday in Addis Ababa said about $11 billion (N1.7 trillion) has been invested in Nigeria’s agricultural sector by private investors and development partners since the Federal Government launched the country’s Agricultural Transformation Agenda in 2011.

Speaking at a session of the ongoing 22nd Summit of African Union Heads of State and Government dedicated to the consideration of measures to boost agricultural production and food security in Africa, President Jonathan urged other African countries to emulate Nigeria’s decision to treat agriculture as a viable business and not “a development programme”, which, he said, was yielding positive benefits for the country.

“Over 65 per cent of the arable land left to feed 9 billion people in the world is in Africa. We must not depend on others to feed our continent. We must feed ourselves, and do so with pride because Africa cannot be truly free, until it can feed itself.

“Greater priority must continue to be given to food security. But for this to happen, we must change how we view agriculture. Africa must end decades of treating agriculture as a development programme. We must focus on value chains, stop exporting raw materials, and instead focus on high-value-added products.

“That is why Nigeria is strongly pursuing an aggressive programme to unlock the vast potentials of its agricultural sector. Nigeria launched the Agricultural Transformation Agenda in 2011, with the goal of increasing our domestic food production by an additional 20 million MT and creating 3.5 million jobs by 2015.

“So much has been achieved since then. To ensure that our farmers get farm inputs directly, we developed the electronic wallet system, which allows farmers to get their subsidized seeds and fertilizers directly via electronic coupons on their mobile phones.

“Nigeria is ready to share its successful experience with other countries, so that this novel approach can be used all across Africa to empower farmers,” President Jonathan told the gathering of African Heads of State and Government.

The President also called for a continent-wide affirmative action in support of women farmers, declaring that Africa must give greater recognition to the role of women farmers and evolve new policies to support them.

“As the African Union embarks on this Year of Agriculture, we must recognize the role of our women farmers, and evolve bold policies to support them. Agriculture is the future for Africa and that future can only be secured if we do more to support women farmers,” he said.

The African Union has declared 2014 as The Year of Agriculture and Food Security in Africa. The 22nd summit of African Union Heads of State and Government has “Transforming Africa’s Agriculture: Harnessing Opportunities for Inclusive Growth and Sustainable Development” as its theme.