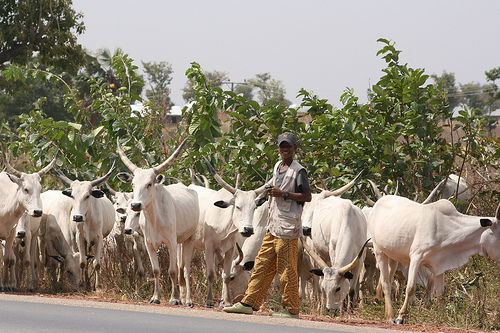 Rustlers accused of murder and theft

The Special Task Force, STF, on the maintenance of security in Plateau on Thursday arrested a woman and 15 men for alleged cattle theft and killing of herdsmen.

The STF spokesperson, Salisu Mustapha, confirmed the arrest in Jos.

Mr. Mustapha said that the suspects had been killing herdsmen and stealing their cows in Barkin Ladi, in Jos South and Riyom local government areas of the state.

“The activities of the rustlers have set the Beroms and the Fulanis at one another’s throats because of  mutual suspicion between the two tribes. The herdsmen have been accusing the Beroms of alleged killing and stealing of their cows and vice versa,” he said.

The spokesperson said that the rustlers, who had been operating as a syndicate, had the Ganawuri, Fulani and Berom tribes as members of the group.

Mr. Mustapha said the STF arrested the syndicate members through the collaboration of a vigilante group in the area.

“The soldiers arrested the syndicate members who were in possession of dangerous weapons with which they carried out their operations of cow theft,” he said.

The leader of the vigilante group, Shehu Aljan, expressed worry over the activities of the rustlers, saying that it had caused the death of several people in the area.

Mr. Aljan said that the group monitored the activities of the rustlers and collaborated with the STF to arrest the culprits. He assured residents of the area of his group’s commitment to arrest of all criminals and hand them over to the security agents.

Cattle rustling is one of the causes of ethno-religious crisis in Plateau that has led to the death of hundreds of people in recent years..