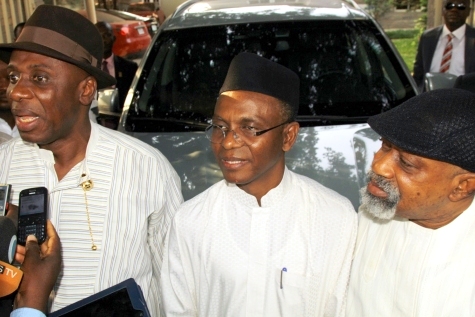 The Department of State Security Services has released a former Minister of the Federal Capital Territory, Nasir El-Rufai, after detaining him for more than 15 hours.

The former minister, who voluntarily walked into the agency’s headquarters at about 9 a.m on Monday, was released after midnight.

It is not clear why the interrogation of the opposition All Progressive Congress chieftain took that long.

Both the SSS and Mr. El-Rufai were not available for comment at the time of filing this report at 5.28 this morning.

One of the most active users of social media in Nigeria, Mr. El-Rufai is yet to update his Twitter and Facebook accounts with details of his ordeals in the hands of Nigeria’s secret police as at the time this report was posted.

Mr. El-Rufai had walked  into the SSS headquarters at about 9 a.m Monday, three days after the agency launched a manhunt for him.

He was accompanied by the Rivers State governor, Chibuike Amaechi, and a serving senator, Chris Ngige.

Mr. Amaechi, who was also allowed access into the SSS office, later left at about 12 p.m, while Mr. Ngige left two hours later.

One of Mr. El-Rufai’s wives, who accompanied him, also left subsequently as she was disallowed access to her husband, the former minister’s spokesperson had said.

“His wife left because she was just kept within the premises but not where he is,” Mr. Adekeye had told this paper.

Mr. El-Rufai’s lawyer, A. U. Mustapha, however remained with the former minister until his release.

The SSS said the former minister’s comment about possible violence in the coming elections was “provocative” and warned that those making inflammatory remarks might be prosecuted.

But Mr. El-Rufai has denied any wrongdoing, saying his position was only based on Nigeria’s electoral history.

The politician, who is one of the most vociferous critics of this administration, had gone underground Friday after the SSS launched a manhunt for him after he failed to honour an invitation from the agency in connection with his remarks at a conference in Abuja on Wednesday that there might be violence if the 2015 general elections were not credible.

The former minister declined the invitation citing his pending suit against the Service over his detention in a hotel in Awka during the Anambra state governorship election last November 16 as reason.

Mr. El-Rufai also insisted on seeing a valid warrant of arrest before he could report to the SSS office.

On Friday, operatives of the SSS stormed two properties believed to belong to Mr. El-Rufai, looking for him.

At the second property late on Friday, the SSS operatives insisted they wanted to deliver the warrant to Mr. El-Rufai personally, ignoring entreaty by his lawyer that the document should be handed over to him.

The opposition APC condemned the SSS for haunting its deputy national secretary, saying the comments attributed to the former minister were not inciting in any way.

Mr. El-Rufai himself has consistently said he would resist ploys by the SSS to silence him.

“Mallam El-Rufai will not be silenced,” the former minister had said through Mr. Adekeye, Friday.

“He will continue to do his patriotic duty of challenging INEC and the security agencies to guarantee the climate for free and fair elections in Nigeria by desisting from partisanship and the embrace of impunity.”

What does Bola Tinubu want? By Femi Aribisala