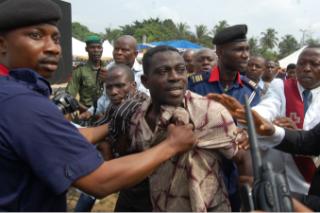 The victim was duly accredited to cover the church event.

Waheed Adebayo, Oyo State Correspondent of Leadership Newspapers, had a rough deal with men of the Nigeria Security and Civil Defence Corps, at the installation of a new Catholic Archbishop of Ibadan Diocese, Gabriel Abegunrin, last Friday.

Mr. Adebayo, who, alongside other journalists, was duly accredited for the event, was assaulted by three officials of the corps, who accused him of “indiscipline”.

The reporter drew the fury of the Civil Defence men when he refused being pushed back as he attempted to photograph the retiring Archbishop Alaba Job handing over to his successor at SS Peter and Paul Major Seminary, Bodija, Ibadan.

The occasion, covered by several journalists, was graced by eminent personalities from within and outside the country, including Governors Abiola Ajimobi and Kayode Fayemi of Oyo and Ekiti states respectively, as well as a representative of Pope Francis II.

While journalists jostled for vantage spots to properly cover the event, personnel of the Civil Defence were also busy trying to prevent them.

One official, identified as A.J. Anjorin, threatened to seize and vandalise cameras of the journalists should they go beyond a point to the podium.

As the retiring Bishop prepared to handover the staff of office to his successor, photojournalists with PRESS tag naturally surged forward for shots. 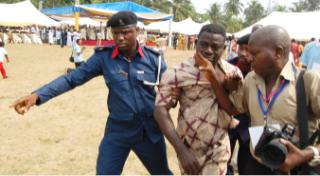 But while personnel from other security outfits, including the Police, Department of Security Service, gave way for journalists to do their job, furious Civil Defence Corps officials pounced on the journalists.

Mr. Anjorin particularly singled out Mr Adebayo, beat him and tore his cloth. His colleagues also joined him in dragging the reporter.

Effort by other journalists to identify Mr. Adebayo did not stop the officials from rough-handling him.

Among the NSCDC men, Mr. Anjorin appeared most outraged and bent on attacking the journalists. He refused to listen to the State Public Relations Officer of the corps who was called in to ask order when they went wild. 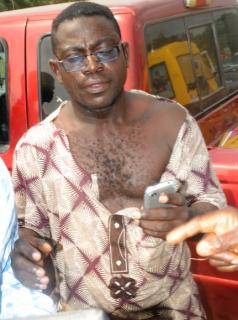 “I am not going to listen to any boss. Take your phone away. You said you are journalists. Go and write whatever you like,” he retorted while being asked to speak to the PRO on phone.

With the kind of treatment handed Mr. Adebayo, people nearly mistook him for a thief and he was almost mobbed by some of the faithful at the occasion.

It only took the timely intervention of his colleagues and the President, Media Arm of the Catholic Church, Tope Abiola, who insisted that the victim (Adebayo) was duly invited to cover the installation before he was left alone.

Mr. Job also directed that Mr. Adebayo be given another cloth to join them at the mass held for the ordination.

Mr. Adebayo later told PREMIUM TIMES that he had never been so assaulted in his decades of journalistic experience.

He said he lost his Samsung Handset, eye glasses, the sum of N10, 000 and his office identity card in the incident.

The Public Relations Officer of the NCSDC in the state, Oluwole Olusegun, could not be reached for comments on Sunday.

He did not answer calls made repeatedly to his phone. He also failed to respond to a text message sent to him for an official reaction.

However, an official of the corps in the state, who would not want her name mentioned because she was not authorized to speak on the matter, said the command was planning to invite Mr. Adebayo to their office on Monday to apologize to him and possibly pay for his damaged property and refund his lost cash.