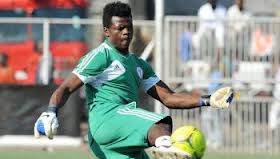 Agbim had been heavily criticised by sports enthusiasts in Nigeria
Super Eagles Team Psychologist, Robinson Okosun, on Thursday said goalkeeper Chigozie Agbim was responding well to the psychological tune up being administered to him at the ongoing Africa Nations Championship (CHAN).

Okosun said in Cape Town, South Africa, that Agbim’s confidence level was restored after mistakes in games against Mali and Mozambique.

The psychologist said Agbim was restrained from taking many calls and going to the social media to avoid distractions capable of lowering his morale.

“By and large, I think he is coping so well. Also, like I said, I still maintain my restriction on him from visiting facebook. And of course, to also to reduce the level of calls he takes, the calls I expect him to take the ones from his parents and his friends, and not the ones that will discourage him.

“But, by and large, I think he is coping fine, he is responding very well to the psychological tuning given to him.

Okosun said that after the South African game, he had a session with the general team “to appraise, tell individual players what I discovered in the match.

“But having said that, I am going to have the last and final session with the team on Friday and they are ready to go.’’

He said other members of the Super Eagles were also responding to confidence-building.