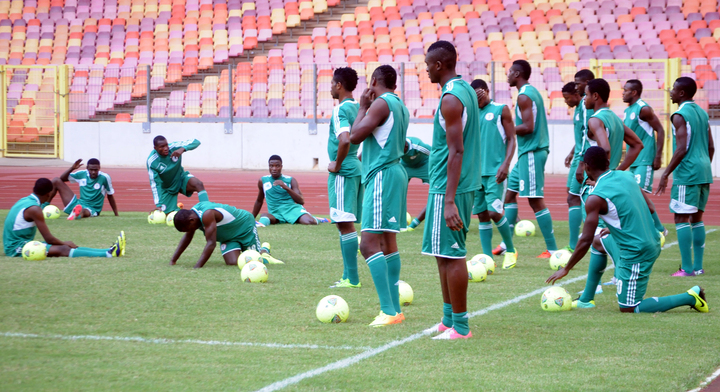 Welcome to the live commentaries of Nigeria vs South Africa final group stage match in the ongoing CHAN 2014.

Thank you very much for following our liveblog of the match.

Match ends with Nigeria defeating South Africa 3-1 to advance to the quarter final of the competition. The Super Eagles’ victory made them runners up in their group behind Mali which defeated Mozambique 2 – 1 to top the group. Host South Africa is out after bowing to the consistent supremacy of the Eagles.

A second yellow card for South African Vuyo Mere. The match is now down to 10 against 10.

Nigerian defender, Solomon Kwambe given a red card after a rough tackle on a South African player. Nigerian now playing 10 against 11.

What would have been the best goal of this tournament, a fabulous strike by Chrisantus Uzoenyi, was held back from the net by the top bar. A semi-bicycle kick.

Agbim, the Nigerian goalkeeper has been brilliant today. He has made two spectacular saves to keep Nigeria ahead with its 3-0 lead in the last 10 minutes.

Second half begins. Nigerian goalkeeper yellow carded for time wasting. Meanwhile in the other match. Mali has equalizer and are now the favorites to to qualify in second place, behind Nigeria.

If the match ends this way, Nigeria and South Africa will move on to the quarter finals.

South Africa loses yet another close chance to get one back after a strike that lobbed the Nigerian goalkeeper went narrowly wide.

If the matches end as it stand, South Africa and Nigeria will go through to the next round, with Nigeria leading the group. Three minutes added to the first half.

In the other match, Mozambique is leading Mali 1-0.

A South African free kick near the 18 yard box is shot straight into the Nigerian wall. Play continues.

South Africa almost got one back after a header from Parker missed the goal mark by inches. Meanwhile, South Africa has made its first change. Mashego is in.

Ede’s goal was almost saved by the South African goalkeeper who got a hand to the shot. But the resulting deflection was not enough to push the ball away from the net.

Nigeria awarded a penalty after the South African goalkeeper fouled Salami, the Nigerian 9.

The South African were unable to convert their spot kick. The Nigerian side have also missed clear opportunities to put themselves ahead of the South Africans after a cross by Ede was missed by an unmarked striker.

Both sides seem to have started very well today, better than each other’s previous matches. But a free kick is awarded to the South African side near the Nigerian 18 yard box after a Nigerian defender badged into an opponent.

Match has began. Nigeria is playing goalkeeper Agbim in the lineup. One minute into the match.

Most of us joined politics for lack of work- Jonathan

Komla Dumor: We Have Lost A Star, By Chimamanda Adichie