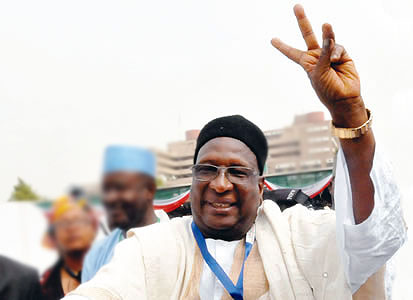 I have not resigned as PDP Chairman, Tukur insists

Mr. Tukur’s fate could be decided in the next few days.

The National Chairman of the Peoples Democratic Party, Bamanga Tukur, has insisted that he has not resigned from his position.

Mr. Tukur stated this on Wednesday afternoon through his Special Adviser on Media, Olivier Okpala.

“Be informed that the national chairman has not resigned, it is all speculation,” Mr. Okpala told PREMIUM TIMES.

There have been reports that Mr. Tukur has resigned from his position.

A meeting of leaders of the PDP held at the Presidential Villa, Abuja, Tuesday night, to decide Mr. Tukur’s fate was inconclusive.

Vice President Namadi Sambo, who presided over Tuesday’s meeting, said it would continue by 6:00 p.m. on Wednesday.

UPDATE: At the end of the PDP caucus meeting on Wednesday night, Mr. Tukur again insisted he has not resigned.

“I’m not one to resign and you will not know,” the PDP chairman told journalists at the state House. “I have not resigned.”

Nigeria’s inflation rate up 8 per cent in December 2013