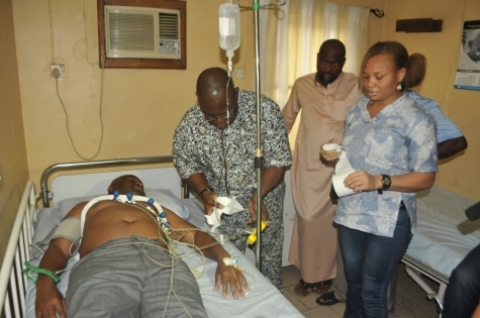 The party accused the president of being behind the attack

The All Progressives Congress, APC, has urged President Goodluck Jonathan to urgently put an end to the worsening security and police impunity in Rivers State, perpetrated by those the party said were out to impress the president and his wife, Patience.

The call followed a violent police crackdown on members of a nongovernmental group, Save Rivers Movement, who had convened for a political rally on Sunday in Port Harcourt.

Armed personnel swarmed on the venue of the rally at the Rivers State College of Arts and Science, Rumuola, firing tear gas and forcefully dispersing those gathered. A serving senator, Magnus Abe, was reportedly struck by a rubber bullet.

Police has denied shooting Mr. Abe. A spokesperson claimed “minimum force” was used to disperse the rally which he said was in defiance of an existing ban on such gatherings.

In a statement on Sunday by its National Publicity Secretary, Lai Mohammed, the APC said the call to President Jonathan became even more imperative, following the “irresponsible act of brigandage by the police.”

”The police went to the venue of the rally, pulled down the erected canopies and fired tear gas at everyone around there and even into nearby homes, with the result that five children are now feared to have died from suffocation due to this shameful Gestapo-style action of the police, who are being funded by taxpayers to protect the lives and property of the same citizens they are now brutalizing and killing,” the party said.

The party said it believed Senator Abe may have been deliberately targeted by the police.

”We understand that the exceptional brutal clampdown on the planned rally by the police, who seem to have now surpassed even their own act of brutality against the people of the state, was aimed at impressing the First Lady, believed to be due in Port Harcourt on the same day (Sunday),” the APC said.

The APC said no state police commissioner would be so bold as to be waging a war against an elected governor and his aides and supporters if not so empowered by higher authorities. The party said it was now clear that the Rivers police commissioner, Joseph Mbu, believes he is now the de facto governor of Rivers state because he has the support of the presidency.

”Mr. Mbu, who is going down in Nigeria’s history as a classic example of an officer of the law turned the biggest violator of the law, has not only defied the resolutions of the National Assembly, he has also thumbed his nose at the ultimatum issued by the Nigeria Labour Congress, NLC,” the party said.

“He is the alternate Inspector General of the Police who takes orders only from a conniving presidency,” the party said.

Rivers crisis a rehearsal for 2015

The APC said the only reason the impunity in Rivers could have continued unabated is because it is a rehearsal for what is being planned for 2015, hence it has continued to raise the alarm over the instigated crisis in Rivers.

”Since this reign of impunity started, the Rivers Governor has been barred from accessing his official residence by the police; members of the State House of Assembly have been tear-gassed and harassed endlessly; the plane owned by the state government has been grounded using the institutions of state; and even a chartered plane bearing the governor has been prevented from take-off, not minding that the member of the state House of Assembly which the plane was supposed to be carrying was not on board.

”This is all happening under the watch of a president who has been widely quoted as saying his ambition is not worth the blood of any Nigerian. The statement now rings hollow, considering what is happening in Rivers and elsewhere, which is widely regarded as a sign of things to come ahead of 2015.”

The party advised Mr. Jonathan to differentiate his position as the leader of the PDP from his role as the president of the Federal Republic of Nigeria.