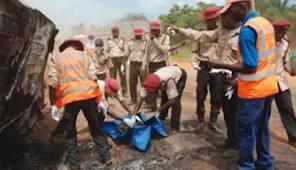 FRSC officials at an accident scene used to illustrate the story

The accident happened on Tuesday afternoon.

Seven persons, including a teenage girl, were killed while five other people were injured in a motor accident along Kano-Gumel high way in Jigawa.

Mr. Muhammad said the accident occurred at about 1:50 p.m. on Tuesday when a Toyota car with registration number GNM 149 AA collided with a Volkswagen car with plate number KMC 905 AH.

The commander said preliminary investigations showed that the driver of the Toyota car lost control following a tire burst and collided with the oncoming vehicle.

He explained that the Toyota car burst into flames as result of which two of its occupants were burnt to ashes.

“Five persons including a small girl were also killed while five others sustained serious injuries,” he said.

Mr. Muhammad said the corpses have been deposited at the General Hospital, Gumel, where the wounded are also currently receiving treatment.