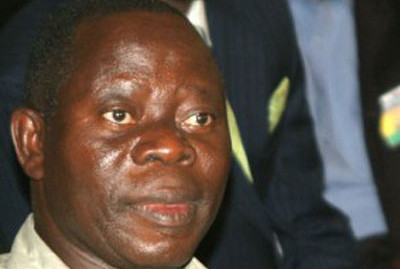 Governor Adams Aliyu Oshiomhole survived a motor accident at Ewu Village along the ever-busy Benin-Auchi road in Edo State at about 9.45am Saturday, 28th December 2013 on his way back to Benin City from his Iyamho Village. The incident occurred at about 9.45am at Ewu, in Edo Central Senatorial District, when a Peugeot J5 Bus filled with tomatoes and plantains apparently lost control and rammed into the Governor’s Flag Car from the opposite direction before swerving into a roadside ditch.

The Peugeot J5 Bus was following a truck that was descending the Ewu Slope when it suddenly veered off into the Governor’s lane from the opposite direction and directly impacted on the Governor’s vehicle, apparently because of brake failure. The good story is that nobody sustained injuries in both vehicles. The Comrade Governor is hale and hearty, his ADC and other occupants of the Peugeot J5 are also in good condition.

The incident has been reported to the Divisional Police Station at Ewu for further investigation. This is to assure all good people of Edo State that there is no cause for alarm. Their loving Comrade Governor is fine, hale and hearty as well as other occupants of the other affected vehicle. The Comrade Governor is wishing everyone a prosperous new year ahead.
Signed

Nigeria incongrous budgeting system and a dissection of the 2014 federal budget, By Jaye Gaskia