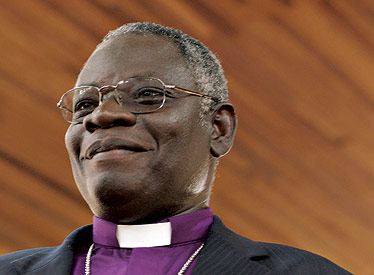 The cleric was kidnapped and promptly rescued.

The family of the former President of Christian Association of Nigeria, Peter Akinola, who was kidnapped and released on Tuesday, has expressed appreciation to the media for prompt reportage of his ordeal that helped in his early release.

Mr. Akinola, his child, and his driver, Jonah Amodu, were on Tuesday seized at gun point by yet to be identified gunmen along the Ibadan-Lagos Expressway.

The victims were later rescued by police officers in Ogun State who were also prompted by the State Governor, Ibikunle Amosun. The kidnappers, however, escaped after engaging the police in a gun duel.

In a letter of appreciation, Mr. Akinola thanked local and international media for their timely support. He also thanked the state government and all Nigerians for their concern.

Signed by Jeremy Akinola on behalf of the family, the letter said the cleric remains deeply touched by the prayers and support of people who through phone calls and personal visits strengthened the family.

“This has rekindled in us that the ideals of improving the life of our youths that is the centre-piece of his retirement life is a worthy cause,” the statement read.

“We assure Nigerian youth that his interest in advancing their cause through spiritual, social, economic empowerment and philanthropic assistance will not be diminished by this ugly development.”

Blackout mars Christmas celebration in most parts of Lagos