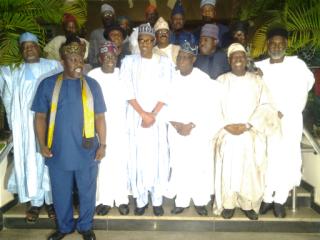 A former President, Olusegun Obasanjo, on Saturday said the ongoing move by the All Progressives Congress (APC) was in the right direction to salvage Nigeria.

He also noted that resolving the challenges facing Nigeria had gone beyond party politics; and that doing what is best for the nation should be paramount.

Mr. Obasanjo stated this during his first round of meeting with leaders of the APC at his Hilltop private residence in Abeokuta, the Ogun State capital.

The ex-president said there was need for a viable opposition in a democracy pointing out that the formation and existence of the APC would enhance Nigeria’s democracy.

“You are at home and you are welcome to be at home. As time goes on I will just appeal that the politics that will be played should be politics without rancour, without bitterness; politics with decency that has Nigerians at heart,” Mr. Obasanjo said.

The two-term democratically elected president under the platform of the ruling Peoples Democratic Party, PDP, said he is an incurable optimist about Nigeria; and that he is totally committed to the country.

He said nothing would separate him from that commitment.

Mr. Obasanjo described the opposition leaders’ visit as an honour he appreciated, saying “the visit is just in the right direction.”

In his remark, a former Lagos State Governor, Bola Tinubu, appreciated the roles Mr. Obasanjo played in Nigeria’s development, having passed through tribulations and surmounted several crises both as a soldier and a civilian leader.

“We are here because of your courage. Nobody can dispute the fact that you have information more than us,” Mr. Tinubu said. “Nigeria is divided more than before. To realise a stable Nigeria, we want to encourage you to continue to speak the truth. We have resolved and (are) determined to rescue Nigeria; we want you to be our navigator.”

The Interim National Chairman of the APC, Bisi Akande, in a brief comment, said the mission of the team was to introduce the party to Mr. Obasanjo.

He said the party was in support of the 18-page letter written to President Goodluck Jonathan, pointing out that Mr. Obasanjo was in the best position to do that.

Some of the APC leaders at the meeting were the party chairman, Bisi Akande; former military head of state, Muhammadu Buhari; former Lagos Governor, Bola Tinubu; and former presidential candidate of the defunct Action Congress of Nigeria, Nuhu Ribadu.

Meanwhile, shortly after the first round of meeting, Mr. Obasanjo and his guests retired into another round of closed-door meeting; whose outcome was not made public.

My Dreams for Nigeria, By Femi Fani-Kayode

Article of Faith: Does God Care That We Are Suffering? (1), By Femi Aribisala