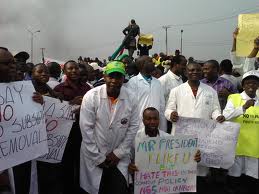 The doctors embarked on a nationwide strike.

Medical activities at the University of Abuja Teaching Hospital, Gwagwalada, were paralysed on Wednesday following the nationwide strike embarked on by doctors.

The Nigerian Medical Association (NMA) had, on December15, directed its members to embark on the nationwide strike from Dec. 18, following the failure of the Federal Government to respond to their demands.

Patients were seen being moved out of the hospital by their relatives due to the circumstance.

Augustin Umhenin, whose wife is in a critical state, said he was moving her to a private hospital, where she could be attended to.

He, however, appealed to both the government and the doctors to find solution to their dispute and call off the strike.

“We beg the government and the doctors to come to an agreement and resolve issues leading to the frequent strikes in the health sector,’’ Mr. Umhenin said.

Mr. Abubakar said stakeholders should go into dialogue and resolve all issues leading to the strike to reduce the suffering of sick patients.

“On our part, we are making all efforts to minimise the suffering of our patients that are on the ground.

“Patients who are stable enough have been discharged early this morning. We are making sure that those that are critically ill do not suffer unduly,’’ he added.