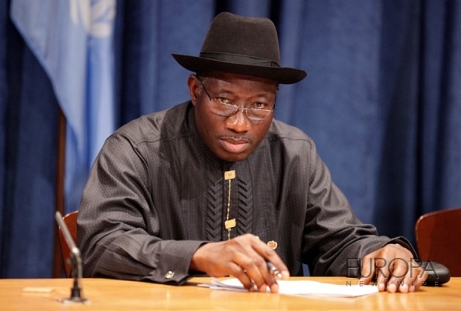 The president did not state the reason for his action.

Contrary to the norm, President Goodluck Jonathan will not personally present the 2014 Appropriation Bill (budget) to the National Assembly.

Rather than appear before the lawmakers, the president has delegated the Minister of Finance, Ngozi Okonjo-Iweala, to present the 2014 Budget before the joint session of the National Assembly.

By his decision, the president also makes history as the first hale  and hearty president since 1999, Nigeria’s recent democratic dispensation after prolonged years of military rule, to delegate budget presentation to a minister.

The exception was late President Umaru Yar’Adua, who while sick and in a foreign hospital delegated his Special Adviser, Mohammed Abba-Aji, to quietly submit the 2010 budget to the leaders of the National Assembly.

However, while the norm had been for the sitting president to personally present the budget, Section 148 of the Nigerian constitution empowers the president to delegate any of his duties to selected persons.

Mr. Jonathan made the delegation of his authority known, Wednesday, in a letter to the Senate President, David Mark, noting that he had nominated the Coordinating Minister for the Economy to do the presentation on his behalf.

“I have delegated the Coordinating Minister for the Economy and Minister of Finance, to lay before the distinguished Senate of the Federal Republic of Nigeria the 2014 budget estimates,” the president said.

However, the president’s letter did not state the date Ms. Okonjo-Iweala would lay the budget before the National Assembly. It is also not clear why the president did not delegate his deputy, Namadi Sambo, to do same.

Mr. Jonathan did not also state the reason he delegated a minister to perform the role.

Mr. Jonathan had earlier shelved an appearance before the National Assembly after reports emerged that some lawmakers, members of the House of Representatives, were determined to boo him in retaliation for a similar action meted by pro-Jonathan lawmakers on Abubakar Baraje, the former factional chairman of the ruling Peoples Democratic Party.

Mr. Baraje and his faction of the PDP, including five state governors, have since fused with the opposition All Progressives Congress, APC. In continuation of the reduction in the influence of the PDP, 37 of its lawmakers in the House of Representatives also formally decamped to the APC on Wednesday.

The budget presentation decision also follows a resolution by the National Assembly on the controversy trailing the budget benchmark.

The Conference Committee of the Senate and House of Representatives on Tuesday agreed on a $77.5 oil benchmark after series of deadlocked meetings.

Prior to the agreement on a common oil benchmark of $77.5 per barrel, the Senate’s position was $76.5 while the House of Representatives stood at $79.

Mr. Jonathan had on November 19 postponed indefinitely, the presentation of the 2014 budget estimates pending the harmonisation of the oil benchmark by the two chambers.

The Chairman, Senate Committee on Information, Media and Public Affairs, Enyinnaya Abaribe, said the Senate was prepared to receive the budget from the president at anytime.

Mr. Abaribe said the Senate Rules empowered it to reconvene from recess to attend to matters of urgent national importance.

Meanwhile, the Senate on Wednesday deferred debates on the Asset Management Corporation of Nigeria (2010) Amendment Bill.

This followed a motion by the Senate Leader, Victor Ndoma-Egba, that the debates be adjourned to enable the service chiefs to brief the Senate on security situation in the country.

The Senate unanimously approved the motion and adjourned debates on the AMCON bill to another legislative day.

The Senate President, David Mark, said, “We will suspend the debates and continue on another legislative day to allow many senators to comment on the bill.’’

The Senate subsequently, went into a closed session with the service chiefs and heads of other security organisations to discuss issues of national security.