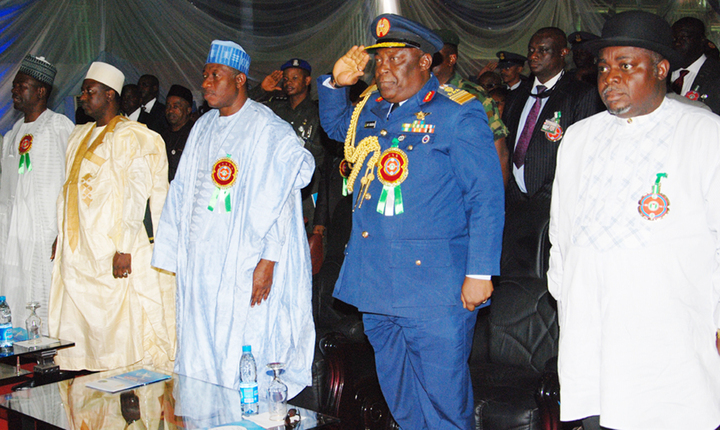 The drone will be used for a variety of functions.

Speaking at the ceremony, Mr. Jonathan said that the unveiling of the vehicle marked another landmark moment in the nation’s history.

He said that besides its diverse military application, the vessel would provide a range of benefits in disaster management, power line surveys and law enforcement.

Mr. Jonathan said that the vehicle would also be useful in aerial imaging/mapping, telecommunications and weather monitoring.

“It is also rapidly becoming an important tool in news coverage, environmental monitoring, and oil and gas exploration.

“Considering the potential impact of its benefit and versatility, I cannot but say how proud I am of the men and women of our Armed Forces,” the president said.

“Apart from their commitment to the protection of our sovereignty, they are helping to keep our nation ahead in military science and technology and to keep their civilian counterparts on their toes.

“Today, as we stand in appreciation of the gallant men and women of our Air Force, we are reminded that hard work and diligence can break many barriers,’’ he said.

Mr. Jonathan commended the Chief of Air Staff and all officers and men of the Nigerian Air Force for the achievement, noting that it would strengthen the country. He said it would also enhance the nation’s role in peace keeping and conflict prevention.

The president said he was optimistic that this stride by the Nigerian Air Force would mark a turning point for indigenous technology in every sector of the nation’s life.

“Let me assure the Air Force of the Federal Government’s support for this and all other research projects. We will encourage and assist private sector concerns to key into mass production of the project to achieve the highest and best commercial use of this prototype Unmanned Aerial Vehicle.

“As I said in my Independence Day address, our nation is made great by the big and small efforts of regular citizens. Indeed, indigenous initiatives remain indispensable in achieving national greatness.

“To retain the country’s importance on the global stage, we must continue to produce leaders in science, technology, and engineering, and invest more in ideas,” the president said.

In his remark, the Supervising Minister of Defence, Labaran Maku, said the development of a surveillance aircraft by the Nigerian Air Force was a bold statement of government’s resolve to provide security for the Nigerian populace.

Mr. Maku, who is the Minister of Information, said that the GULMA UAV would potentially afford the armed forces a window of immense opportunities in its task of acquiring timely intelligence and combating criminality.

“Although the UAV was a brainchild of the Nigerian Air Force, it is important that other services and security agencies incorporate it into their operations, if its potential is to be fully harnessed.

“There is therefore, the need for a comprehensive policy on UAV acquisition and operation to optimise the employment of GULMA UAV by all services and security agencies,’’ he said.

Earlier, the Chief of Air Staff, Air Marshal Alex Badeh, had said that the GULMA was designed to meet vast expectations and needs.

Mr. Badeh said that the GULMA could be employed by the armed forces and security agencies for the protection of the country.

He explained that the air force envisaged partnership with agencies such as NEMA and the Nigeria Air Space Management Agency for weather forecasting.

“Furthermore, the GULMA, as a qualitative, timely and reliable source of information could serve as a powerful tool for media practitioners.

“To sustain the current tempo of development, the NAF would require the assistance of government in infrastructure and human capacity development,” the Air chief said.