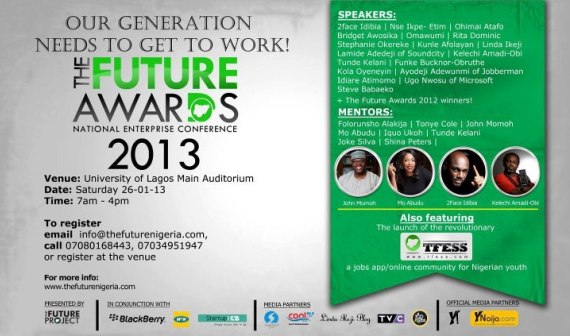 100 young Nigerians were honoured by the presidency on Sunday.

The Africa youth leadership platform, The Future Awards Africa, TFAA, kicked off a week of celebration Sunday with a formal launch of events by the Federal Government. The launch was led by the Nigerian President, Goodluck Jonathan, represented by Vice President Namadi Sambo at an event at the State House, Abuja.

In addition to commencement of the week of celebrations, Sunday’s event also celebrated the TFAA Best 100:­ some of the best young leaders that have been nominees of the awards since its inception in 2006.

“We are grateful for the support of the Nigerian Federal Government in honouring its achieving young people” said Adebola Williams, Director of Operations for the awards.

He said the those being celebrated are young people who, over the past decade and more, have blossomed and risen by themselves, in spite of the difficulties of living in Nigeria and the challenges of leadership.

“The least our nation can do therefore is recognize them and honour them, so they can do even more and sustain this movement,” he said.

“This government has seen the importance of the youth, and places serious value on them. Through our transformation agenda, we are creating job opportunities for the youths; my administration is committed to increasing access to education, we have initiated programs like YOUWIN” Mr. Jonathan, represented by Vice President Namadi Sambo, said at the event. “As Nigerians, we know there’s more to be done, but yet, there’s plenty to celebrate.”

Also speaking, Ibukun Awosika, Founder and Chairperson of The Chair Centre Ltd said: “I salute the young people who will make my dream for Nigeria come true. What you can’t be today, you can’t create value for tomorrow, you force the system to respond to your creativity”.

The next stop for The Future Awards Africa, after events in Lagos, Addis Ababa and Abuja, is Port Harcourt; where this year’s edition of the awards will hold. This will be followed by School Seminars where students will be mentored and coached in practical sessions on career and talent, first in Port Harcourt and then in secondary schools across Nigeria.

The awards are hosted by the Rivers State Government and held in partnership with Microsoft, the British Council, the Federal Ministry of Youth Development, Access Bank and the Tony Elumelu Foundation. Microsoft will also be launching its jobs and employability portal, Aiki.ng at the awards.

Obasanjo And The Sudden Possession By Mandela’s Spirit, By Adekoya Boladale