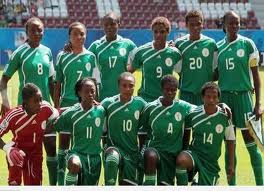 The class of 2010 did Nigeria proud

The team are seemingly sure bets for Canada 2014

The Nigeria U-20 women’s football team, the Falconets, are seemingly the favourites for Saturday’s FIFA U-20 Women’s World Cup qualifying match between them and the U-20 women’s team of Tunisia.

The match comes up at the National Stadium, Abuja on Saturday, December 14, at 4 p.m.

The North African girls raised not a few eyebrows when they pounded their Moroccan counterparts 8-1 on aggregate (4-0 in Morocco and 4-1 in Tunis), but that still paled beside the 16-0 aggregate mauling that the Falconets handed out to their opponents from Sierra Leone.

The Falconets, silver medalists at the FIFA U-20 Women’s World Cup in Germany in 2010, also reached the semi finals in Japan last year and are considered sure bets for the seventh edition taking place in Canada in August 2014.

The Tunisian delegation flew into Abuja on Wednesday, aboard an Egypt Air flight and would depart on Sunday.

PDP chieftain threatens to sue Obasanjo over letter to Jonathan