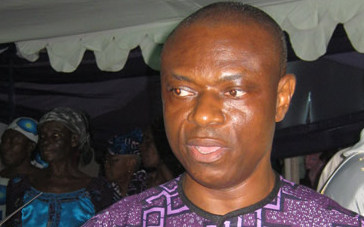 The former bank director is accused of fraud.

The Chief Judge of Lagos State,  Ayotunde Phillips, on Thursday transferred the N7.2 billion theft trial of a former Managing Director of Bank PHB, Francis Atuche to another judge.

Mr. Phillips re-assigned the case to Lateef Lawal-Akapo following the transfer of the former trial judge, Adeniyi Onigbanjo, to the Commercial Division of the Ikeja High Court.

No date has been fixed for re-arraignment of the accused before Mr. Lawal-Akapo, also of the Ikeja High Court.

The Economic and Financial Crimes Commission, EFCC, had on May 17, 2011 arraigned Mr. Atuche and a former Director of the bank, Lekan Kasali, before Mr. Onigbanjo.

They were charged with conspiracy and stealing.

The EFCC said that the duo conspired and stole the money belonging to the bank between November, 2007 and April, 2008 while Mr. Atuche was the chief executive officer.

The accused had, however, pleaded not guilty.