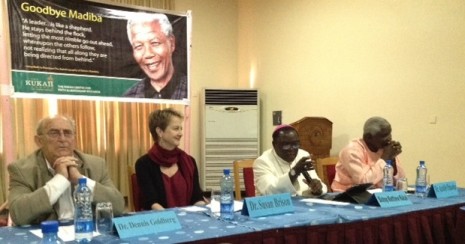 With the demise of Mandela, keeping memory alive is fundamental to the task of ensuring that the mistakes and the misdeeds of the past are not repeated. These were the words of Dennis Goldberg at the Kukah Centre seminar on Sunday on the theme – “Healing the Nation: Why Memory Matters”.

Mr. Goldberg was one of those tried together with Madiba Nelson Mandela in the Rivonia Trials leading to his incarceration for 22 years. A white member of the South African Communist Party and the ANC, he holds the singular distinction of being the first person to organize a training camp for the first set of freedom fighters trained within South Africa.

Mr. Golberg regretted the way that the media is reporting Mandela as if he was the sole leader of the ANC. Mandela, he explained, was very conscious of and committed to the principle of collective leadership. As their trial was going on in 1964, there was a decision to send Oliver Tambo out of the country so that there would be a relay in leadership while they were in jail or killed. It was infect the excellent leadership and campaign of Tambo that created the fame that accompanied Mandela. Mr. Goldberg explained that as they knew they had no legal defense against the charges they faced, they adopted the strategy of turning the trial into an inquisition of the apartheid regime. Their speeches were aimed not at the judge but at the South African nation, which needed inspiration to continue with the struggle.

Mr. Golberg opined that at the end of apartheid, they were confronted with two challenges. The documentation of the atrocities committed by the apartheid regime had been deliberately incinerated by the regime in steel furnaces as shredding them would take too much time.

Secondly, between the release of Mandela in 1990 and the takeover of power by the ANC in 1994, the security forces of the apartheid regime had killed 10,000 black people with the hope of creating crisis and disrupting the transition. While Mandela and the ANC leadership were assuring the white community, their brethren were being massacred. It was in this context that the Truth and Reconciliation Commission was established to keep memory alive. He added that not all the truth was told and reconciliation was incomplete but the process was necessary for a successful transition.

Mr. Golberg also spoke of the legacy of apartheid on the psyche of the people. He gave the example of the excessively high level of rape and sexual violence in the country. These despicable acts, he explained were not about sexual gratification. It’s about the perverse effects of the humiliation of a people during decades of powerlessness. The man now seeks someone he is stronger than to show “his power”.

In his remarks, Bishop Mathew Kukah contended that Nigeria is in urgent need of healing and reconciliation in diverse areas of our national life. From independence in 1960 till date we have been through various experiences that have created pain and suffering. As more and more of the first generation leaders die off, there is urgency in getting the narratives of these leaders so that we can learn.

He promised to commit his Centre to the task of searching for national healing and reconciliation on the basis of keeping memories alive and interrogating them for better understanding. In so doing, we must seek answers to key questions. What should we remember? How should we remember what we may ultimately agree upon should be remembered? Do we even need to remember unpleasant experiences at all, especially considering the fact that they may have the tendency to bring up unpleasant memories and start a new round of crisis? In short, how do we respond to unpleasant memories? In seeking answers to these questions, we should always remember that in “Healing the Nation: Memory Matters”, he concluded.

Our Mandela and Our Future: These Terrible Oppositionists, By Jibrin Ibrahim