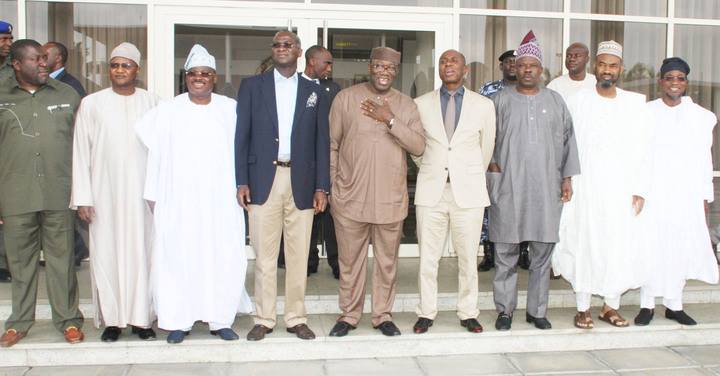 Says it has irrefutable evidence on the plot to remove five PDP governors who recently join it.

The All Progressives Congress, APC, on Thursday warned the ruling Peoples Democratic Party, PDP, against its alleged plot to remove the five governors who recently left for the opposition party.

APC, in a statement on Thursday by its spokesperson, Lai Mohammed, said it had uncovered moves by the PDP to declare the seats of the governors vacant, warning that such a move had potential of plunging the country into chaos.

They were all members of the splinter New PDP, which fused into the opposition party.

The APC noted that though the PDP had continued to lick the mortal wound inflicted on it by the loss of five of its 23 governors in one fell swoop, any move to declare the seats of the governors vacant would be met with an unprecedented show of people’s power that would end ‘once and for all,’ the impunity of the ruling party and the Presidency.

“We have irrefutable evidence that the PDP is desperately shopping for a pliant judge who will be heavily induced to declare vacant the seats of the five governors who recently defected to the APC,” the statement said.

“We also have the name of the lawyers who have been retained by the PDP for this hatchet job.

“We are in possession of the various nefarious legal options being explored by the villainous duo of the PDP and the Presidency but we hereby serve a strong notice to the duo that any attempt by anyone through any means other than what is provided for in section 188 of the 1999 Constitution as amended will not only have grave consequences but will leave the polity severely bruised.”

The party described the PDP and the Presidency as anarchic and nihilistic, adding that it was certain the duo would not mind to pursue any narrow and selfish objective even if doing such could plunge the nation into crisis.

“But their cup is gradually getting full. Having got away with their trademark impunity in Delta and Anambra States, these lawless, reckless and feckless duo of malfeasance now believe they can continue to act without regards to the laws of the land and with no scintilla of decency.

”We wish to state unequivocally that should the PDP go ahead with this plan, there will be widespread repercussions as the APC has resolved that henceforth, every act of impunity of the PDP and the Presidency will be met with stiff resistance in the form of a vociferous telegraphing of people power, the likes of which have not been witnessed in these parts.

APC said since it had 16 governors with more coming into its fold and now controlled the National Assembly, it was capable of using the people’s power to abort acts of impunity, disregard for the laws of the land and barbaric brigandage, adding “that is exactly what the APC will do in the event of any unlawful declaration of the five Governors’ seats vacant.”

It also warned PDP and the Presidency not to frustrate the ongoing cleaning up of the judiciary by inducing a servile and disreputable Judge to do the duo’s bidding.

”We recognize the efforts of the present CJN to sanitize the Judiciary since she assumed the mantle of leadership but she should not allow any black leg to reverse the gains that have been recorded on the altar of unmitigated avarice. This is because if that happens, Nigerians will hold the Judiciary vicariously liable for the catastrophic consequences that may follow,” it noted.

The APC accused the PDP of engaging in double standard, recalling that in the last 14 years, elected members of the State Houses of Assembly as well as the National Assembly had been defecting mostly to the PDP, but it had never declared their seats vacant.

It recounted, ”Late Senator Wahab Dosunmu and Senator Adeseye Ogunlewe, then of the Alliance for Democracy (AD), blazed the trail when they decamped to the PDP within a year of their election. Since then scores of elected lawmakers at state and federal levels have defected to the PDP without any eyebrows being raised or anyone declaring their seats vacant.

”As a matter of fact, the PDP under late President Umar Yar’Adua organized an elaborate reception to welcome Gov. Yuguda to the PDP. Why then should the case of the five PDP Governors (still counting) who have joined the APC be different? Why is the PDP suddenly afraid of taking the same medicine it has been administering to others? Does it mean that all the bravado that has been displayed by the PDP, which says it is not bothered by the defection of the five Governors, is just a facade to hide its deep pain at the monumental loss?”

APC asked the PDP and the Presidency to allow a rare moment of introspection, by reading and guided by the ruling of the Supreme Court after the ruling party attempted to make then Vice President Atiku Abubakar to lose his seat and to also strip him of his privileges following his defection to the defunct Action Congress of Nigeria, ACN.

However, the spokesperson of the PDP, Olisa Metuh, told PREMIUM TIMES in a telephone interview that the party would not engage in such illegality as claimed by the APC.

“Discussions are ongoing. The party has not foreclosed any negotiation with the governors and other stakeholders,” Mr. Metuh said.

“We’re a law-abiding party and we will never engage in any illegality or unlawful act in the resolution of this matter.”