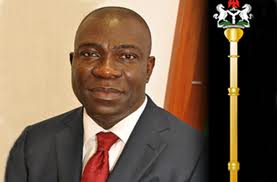 Says seven-year single tenure will be a disservice to Nigeria.

For proposing a single tenure of seven years for some elective political offices in Nigeria, the Deputy Senate President, Ike Ekweremadu, has come under fire from the Conference of Nigeria Political Parties, CNPP, a coalition of opposition parties in the country.

The group, in a statement on Thursday, asked the State Security Service, SSS, and other relevant security agencies “to as a matter of urgent national importance investigate the Deputy Senate President for making the statement.”

The statement was signed by CNPP’s spokesperson, Osita Okechukwu.

Mr. Ekeremadu, who is also the Chairman of the Senate Committee on the Review of the Constitution, had called for a seven-year single tenure for the Offices of the President, Vice President, Governor and Deputy Governor.

He was reported to have said that the governors fighting the President Goodluck Jonathan had hinged their complaint on the fact that if the president got second term by the time they had left office, he (President) would start harassing them.

He added that the mistake the Committee made in its recommendation was to exclude the incumbent from benefitting if the proposal scaled through.

Describing the proposal as “treasonable” the CNPP, said foisting the rejected seven-year single tenure through the back door of Doctrine of Necessity would be a grave disservice to the country and would portend more danger than the four year double tenure.

The group said that since last Sunday when Mr. Ekeremadu’s proposal was reported in the media, it had waited patiently for rebuttal but it did not come.

The group said it was of the view that since Nigeria had witnessed general elections in 2003, 2007 and 2011 and nothing happened, Mr. Ekeremadu should explain why the 2015 polls would end up in crisis.

It said, “CNPP is of the candid view that Nigeria has witnessed general elections, as imperfect as they were in 2003, 2007 and 2011 and heaven did not fall; therefore Senator Ekweremadu as a senior officer of the state owe us a duty to explain why the 2015 general elections will end up crisis.

“In sum, we are making this call for we have heard those close to President Goodluck Jonathan, like Alhaji Asari-Dokubo and Kingsley Kuku making similar statement that heavens will fall if President Jonathan looses the 2015 election.”

The media office of the Deputy Senate President declined to comment on the CNPP’s demand when PREMIUM TIMES contacted it.