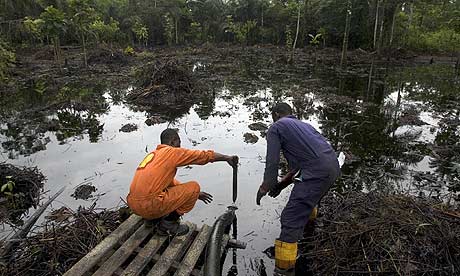 Agip and Nigerian authorities are working to contain the spill.

Crude oil discharged into the Atlantic Ocean at Agip’s export terminal has hit the shoreline in Bayelsa, a community leader of a settlement along the Altantic coastline in Bayelsa said.

The spill, which occurred on Thursday, Nov ember 28, spread to the coastline on Saturday, the resident said.

Residents of Odioama, a coastal community along the Atlantic shoreline, said on Tuesday that fishermen and members of the community noticed the oil on Friday in the high seas when the oil deposits stained their fishing nets and boats.

The residents, who spoke through their community leader, said tidal currents eventually conveyed the oil deposits to the coastline where the oil littered the shoreline.

Francis Ikagi, the Chairman, Odioama council of chiefs, said on Tuesday that the thick coating of crude which covered the water had spread into Odioama creeks and St Nicholas River in Brass Local Government Area of Bayelsa.

“On the 29th of November, 2013 when I was returning home from Yenagoa to my community through Nembe route, I saw a very thick layer of crude oil on the river.

“That was from a distance of about 35 minutes by speedboat. I started noticing the signs of crude oil on the water from that far up to the Odioama Creek.

“The thickness was too much. Even water spraying up from the speedboat engine was very black in colour as a result of the crude oil on the water,” Mr. Ikagi said.

According to the community leader, officials of Nigerian Agip Oil Company (NAOC) have been making frantic efforts to contain the spill incident.

“They have deployed aircrafts, boats, vessels personnel as well as materials to the spill site which is an indication that the spill is a major one.

“We have communicated to them in writing on the extent of impact on our communities but we still await a response from then,” Mr. Ikagi said.

The National Oil Spill Detection and Response Agency (NOSDRA) had announced that it has commenced a probe of the incident and dispatched its oil spill response vessel to the site.

The management of NAOC, and its parent firm, Eni, have declined to comment on the spill which industry sources say was caused by operational failure.