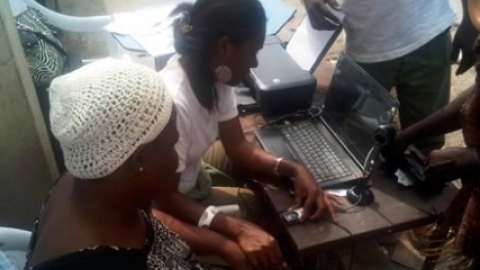 Suspect was unaware that he could get in trouble

The Oyo State Police Command on Tuesday paraded a 29-year-old man, Olatide Akinkunmi, for the illegal possession of a data machine belonging to the Independent National Electoral Commission, INEC.

The suspect, according to the police, was arrested at his house in Isake, Ogbomoso.

According to the state Commissioner of Police, Mohammed Indabawa, the suspect was arrested when police detectives stormed his home on November 28 after tip-off from a member of the public.

Mr. Indabawan said the suspect could not give a satisfactory explanation on how he came about the machine. The police are currently investigating the incident.

In a brief chat with journalists, the suspect said he did not know the system could land him in trouble.

Mr. Akinkunmi, who claimed to be an Information Communication Technology expert and the managing director of a local IT company, said he bought the system from a student of the Ladoke Akintola University of Technology, LAUTECH, Ogbomoso, through a go-between.

He told journalists that he was not at home when the system was brought to him and only got to know that it was customised for the commission when he got back and saw it.

“When I called the attention of the man who brought it for me to this, he said there was no problem and that the man who wanted to sell it had been using it for the past one year without any issues,” he said.

Mr. Akinkunmi added that he got into trouble when the person he resold it to dragged him to the police after the suspect failed fix a fault in the system’s keyboard.

“That was when the police invited me and things started magnifying. I bought the system for N20,000 and resold it for N26,000,” he noted.

Also paraded at the command headquarters in Ibadan were two suspects arrested with a truck-load of substance suspected to be Indian hemp.

The police said the substance, found in 646 bags, was worth N11 million.