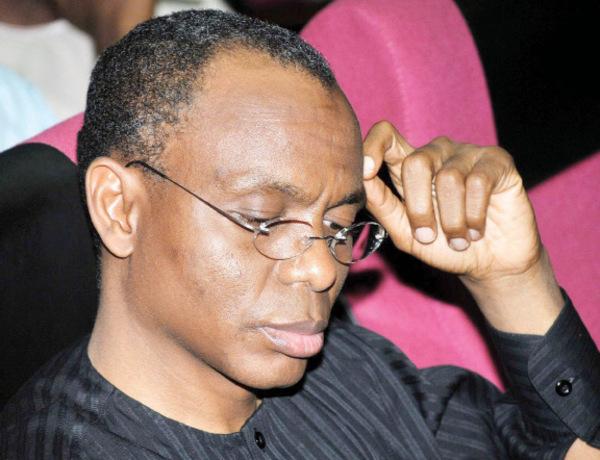 UPDATE 3: The gun-totting SSS operatives at El-Rufai’s hotel in Awka appear to have withdraw. Mr. El-Rufai says they are no longer at the reception of the hotel. “We can’t find them here any longer,” the former minister told PREMIUM TIMES. “But we are trying to see if they have moved to the gate or what. We will only be able to tell when we try to drive out.”

UPDATE 2: El-Rufai now fully contained to his room in the Fontel Hotel in Awka, the Anambra State capital city. Entry and exit of hotel after the former minister tried to go out at about 3.30 p.m.

UPDATE 1: Operatives of the SSS are still there. Three of them are in the reception area while two are sitting in a white pick-up van, with registration number AJL 296 Al, parked outside the hotel.  Previous access to newsmen now cut off.  Mr. El-Rufai says, in a message to our reporter, that his spirit remain unbowed.

Former Minister of the Federal Capital Territory, Nasir El-Rufai, who was confined to his hotel, Fontel Hotel, in Awka, by the State Security Service has stormed out of his hotel.

The former minister was seen in the company of Senator Osita Izunaso leaving his hotel and walking into the studio of the African Independent Television where he is expected to be interviewed.

Mr. El-Rufai had earlier posted on his twitter page, threatening to resist his arrest.

“I intend to discharge my duties today no matter what, and will go out when ready. I will dare the SSS to shoot…..we wait and see…thanks,” he said.

Mr. El-Rufai, a chieftain of the All Progressives Congress, APC, had arrived Awka, the Anambra state capital Friday to observe the election in which his party’s candidate, Chris Ngige, is a leading contender.

But security operatives descended on his hotel this morning blocking him from leaving the hotel.

Mr. El-Rufai said he telephoned the Director General of the State Security Service to complain but that his calls were unanswered.

Matters got to a head when SSS operatives forcefully seized the APC chieftain’s telephone in the midst of a phone interview with AIT’s Obiora Ilo, thus abruptly ending the interview.

Spokesperson to the SSS, Marilyn Ogar could not be reached to comment for this story.