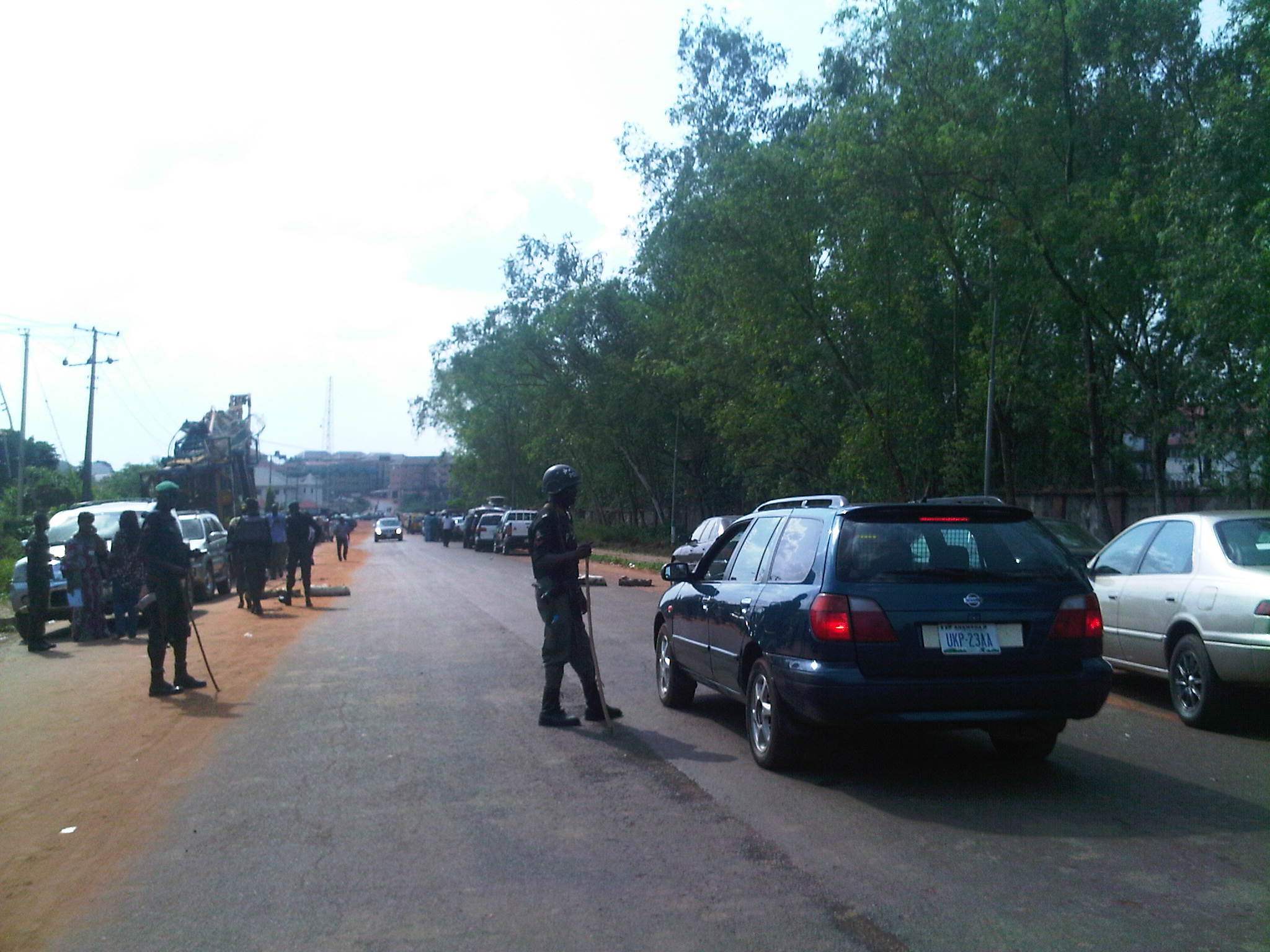 The PDP and the ACN trade blames over the police’ claim.

The 180 persons arrested by the Imo State Police Command have insisted that they are election monitors and not thugs as claimed by the police.

In a statement on Friday, the suspects said they are members of the Justice and Equity Organization, JEO, and they had been accredited as observers for the November 16 gubernatorial election in Anambra State.

Mohammed Katsina, Commissioner of Police, Imo State, said that the persons came from Osun State and were heading to Anambra for the election.

“They were arrested while waiting to link up with their contacts in Anambra ahead of Saturday’s governorship elections,” Mr. Katsina said during a press conference on Thursday.

But the group accused the police of “retrogressive onslaught and repression” of civil society activists and groups officially accredited by INEC ahead of Saturday’s election.

“Our Organisation, the Justice and Equity Organisation (JEO) accredited as observer in the Anambra Governorship elections of 16th November, 2013 was the victim of police repression and political game,” the group said in a statement signed by O. Obafunsho, the Coordinator.

“To ensure efficiency and credible observation, we have organised a pre-election training and briefing session for our Observers. The occasion was also used to distribute election observation paraphernalia to our agents for the Saturday elections.

“While this peaceful and unobtrusive process was ongoing, a team of police men, acting ostensibly to protect the interest of some evil minded people swooped on the hotel, arrested all the 180 observers, mobilised by our organisation from across the country and carted away the INEC-provided election observation identification tags among other valuables.

“This urgent public notice therefore became expedient in view of the very reliable information at our disposal, on a planned purported police stage-managed drama, wherein the arrested activists would be paraded as hoodlums and common criminals.

“In fact, the Police is set to display some arms and ammunition to press home its chicanery on the intent and gathering of the comrades,” the statement said.

In their press conference on Thursday, the police said that two pump action rifles, live ammunition, 15 buses, and other incriminating material were recovered from the group.

“The security agents and the command had worked so hard to attain peace and will not allow any politician, no matter how highly placed, to compromise it,” Mr. Katsina had said.

While urging the Inspector General of Police to call his men to order, Mr. Obafunsho stated that the “undue militarization” of Anambra State informed their choice of Owerri for the training and briefing of their mobilized observers.

“This arrest and detention of well-meaning Nigerians, who have sacrificed their time and comfort for voluntary service in the interest of the nation must be roundly and soundly condemned by all,” Mr. Obafunsho said.

“We hereby admonish the Police authorities to order the immediate release of our members to forestall undue tension during and after the election,” he added.

Already, the Peoples’ Democratic Party, PDP, and the All Progressives Congress, APC, have started trading blames over the arrested persons.

While the PDP accused the APC of sponsoring the “181 heavily armed political thugs,” the latter insisted the police were acting out the script of the former.

In a statement on Friday, Olisa Metuh, the PDP Spokesperson, said the arrested persons were part of the plot by the APC to disrupt and discredit the election.

“The entire nation received with shock the news of arrest by the police of 181 heavily armed thugs, sponsored by the APC and ready to be deployed from APC controlled Imo State to Anambra where they have been instructed to unleash mayhem and terror on the people,” Mr. Metuh said.

But in its response, the APC described the police’s claim that the 180 persons were arrested with arms and fake voter cards as “nothing but tales by moonlight.”

“Those who were arrested by the increasingly partisan police are election monitors from Osun, who are members of the Justice and Equality Organisation, an INEC-accredited election monitoring NGO,” the APC said in a statement signed by Lai Mohammed, its interim National Publicity Secretary.

“With INEC having trained key officials of the accredited election monitoring NGOs, those trained are now training their members in readiness for the election. Those trained by INEC are in Owerri.

“Those whom the police have labelled as thugs are members of the Justice and Equality Organisation. They are in Owerri for training ahead of the election. They chose Owerri because of its proximity to Anambra and its affordable hotel costs.

“None of them is a member of the APC, despite the insinuation by the police, and none is armed, because you don’t need guns to monitor elections. Any weapon exhibited by the police must have been procured by them to justify their gaffe.

“The only offence that the arrested election monitors have committed, in the eyes of the police, is that they are from a staunchly APC state with zero tolerance for the do-nothing, bumbling PDP,” Mr. Mohammed added.