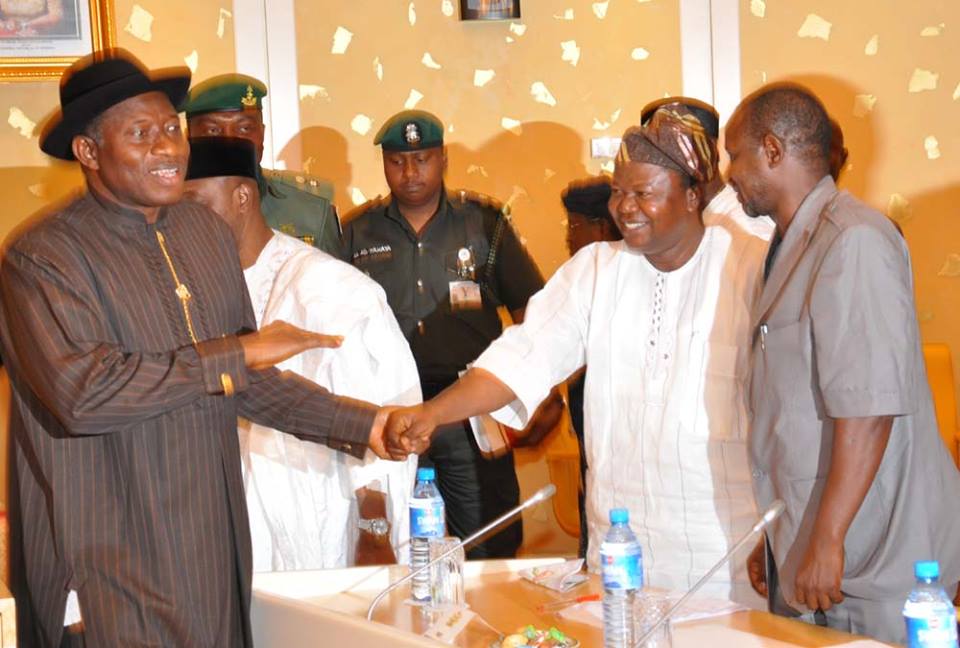 President Goodluck Jonathan and members of ASUU at the presidential villa

After a marathon 13-hour meeting between President Goodluck Jonathan and the Academic Staff Union of Universities (ASUU), the union’s leader said there was a message from the President which would be presented to their members for consideration.

There are however indications that the meeting, which started at about 2:40 p.m Monday afternoon and went on till aout 3:30 a.m Tuesday morning, may have yielded positive results.

Monday’s meeting is the first time the president would lead government’s delegation team for negotiation with ASUU since the commencement of the strike four months ago.

The presidency had taken over the negotiation with the striking union on September 20, with Vice President Namadi Sambo heading the government team. He however was unable to make any headway in the talks with the university teachers.

Emerging from the meeting at the First Lady’s conference room at the presidential villa, ASUU President, Nasir Faggae said, “We have had lengthy meeting with Mr. President, rubbing minds on how best to address the problem of university education in this country.”

On whether the lecturers are now going back to the classroom, the ASUU President said, “that is up to our members.”

When asked to disclose the the President ‘s message that would be delivered to the members of the union, Mr. Faggae said, “I cannot tell you, it’s not for you, it is for our members.”

On whether he was impressed with the President’s message, Mr. Faggae said, “Don’t put words into my mouth, our members will determine that”

However, Labour Minister, Emeka Wogu told State House Correspondents that meaningful progress was made in the negotiations with ASUU, expressing hope that the striking lecturers would call off the strike.

Mr. Wogu said, “We made progress, the President of ASUU told you that they are going back with a message from the Federal Government back to their members and the message is full of high expectations and hope.”

On whether the strike would be called off, he said: “That is why the message is full of high expectations and hope. So our prayers is that they come back with positive outcome. They might not even come back to meet us, they might take decisions there that will meet your expectations.”

“Nigerians should be patient for ASUU to finish their meetings and come out with a message to Nigerians.”

About four hours into the meeting (6:30p.m. Monday) the meeting broke for a 15-minute break. The ASUU President led his team to their bus, a white Toyota Bus with Lagos registration number, BU 190 EPE, to confer amongst themselves. While making the consultation, the ASUU leaders left the leadership of the NLC, the TUC and government representatives back at the hall.

The President of the Trade Union Congress (TUC), Bobboi Kaigama as well as staff and other members of the congress were also at the meeting.

On the side of government were Vice President Sambo; Secretary to the Government of the Federation (SGF), Anyim Pius Anyim; Chief of Staff to the President, Mike Oghiadhomhe; Minister of Finance, Ngozi Okonjo-Iweala; her counterpart in the Labour and Productivity Ministry, Emeka Wogu and the Supervising Minister of Education, Nyesom Wike.

Synopsis of the contentious 2009 agreement

The agreement included details such as the breakdown of lecturers’ salary structure, staff loans, pension, overtime, and moderation of examinations.

Part of the agreement dwelt on funding of universities where both parties agreed that each federal university should get at least N1.5 trillion between 2009 and 2011 while state universities, within the same period, should receive N3.6 million per student.

The agreement also had parts that asked the re-negotiation committee to ensure that at least 26 percent of Nigeria’s annual budget was allocated to education, and half of that allocation to universities.

The agreement also asked that the 2004 Joint Admission and Matriculation Board, JAMB, Act, and the National University Commission Act 2004, be amended.

Text of the suggested amendment bills – including suggestion for amendment of the Education (National Minimum Standards and Establishment of Institutions) Act 2004 – were provided in the agreements.

The agreement was signed by Bolanle Babalakin, the then chairman of Committee of Pro-Chancellors of Federal Universities; Gamaliel Onosode, chairman of the re-negotiation committee; and Ukachukwu Awuzei, the then president of ASUU.

The agreement demanded a heavy financial commitment from the government and was an adaptation of an earlier agreement reached in 2001.

It is unclear how much of the agreement have been implemented by the government.

However, the secretary to the federation, Pius Anyim, after one of the recent failed negotiations, said that most of the issues contained in the 2009 agreement, had been fully met except for the earned allowances estimated at N92 billion.

“Some of the issues which bothered on amendment of pensionable retirement age of academics in the professorial cadre, consolidated peculiar allowances (CONPUAA)- exclusively for university teaching staff, National Health Insurance Scheme (NHIS), setting up of budget monitoring committee in all public universities have been fully implemented,” he disclosed.

Bamidele Upfront: The Tsunami of Family Breakdown, By Bámidélé Adémólá-Olátéjú

Where are the Muslim Scientists? By Muhammad Jameel Yusha’u