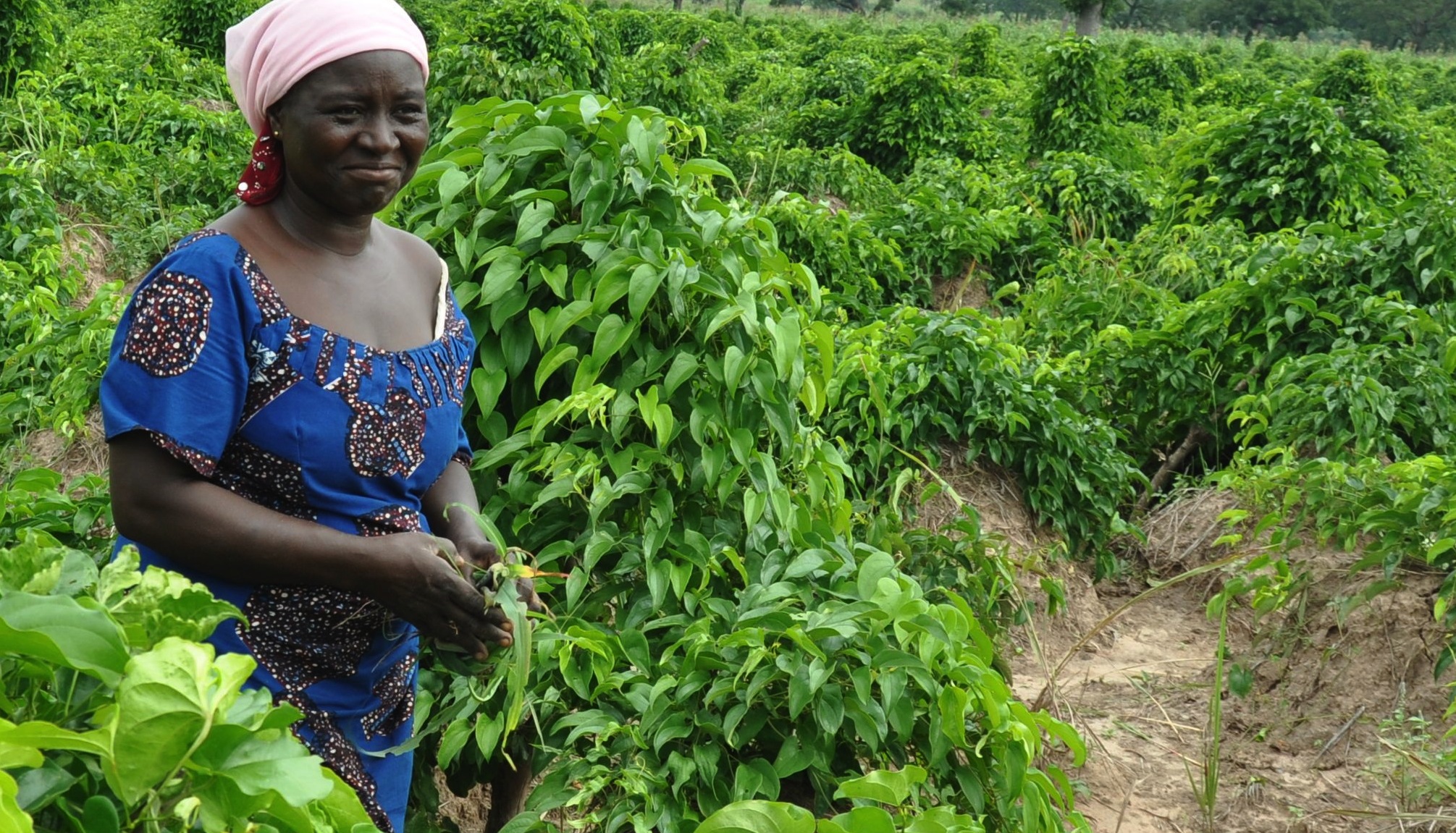 For Susan Godwin, this nation’s role model female farmer, honour came with a sense of irony. At the time Oxfam, the global development civic group, and a network of other NGOs were recognizing her with the award of Nigeria’s Female Food Hero, in far away Washington DC, her landlord broke the tenancy agreement that made her a successful farmer in the first place.

Not done with that, the landlord simply transferred her yam farm, including all the heaps she had already prepared to his brother, practically now rendering her landless.  However, this loss of her main farm was not going to deter Susan.  Her life has been one long narrative of struggles and challenges but the goal is always clear for her.

For women the land challenge is real

Surrounded by children of her community, in her modest home at Tundunadaba village in Obi Local Government Area of Nasarawa State, Susan opens up on her challenges and travails:

“Last year, the land I rented to farm on for five years was taken away from me after just two years. I had done up to ten thousands heaps, and I was called and told that those heaps were being leveled. It became a police case, and they said I would not farm there anymore. After the police came in, they paid the amount I used to make the heaps, but there was no refund for the rent I already paid for the remaining years to use the land” she said in an interview at her.

Susan understands the challenge and opportunities of scale in farming. For a woman that started harvesting a modest output of no more than 4 and 8 bags of groundnut previously, she managed to increase her yield to between 13-15 bags on the same piece of land. On top of this, she began to add value by processing some of her farm produce. After harvesting her groundnut for instance, she milled it, separating the groundnut oil from its cake. Several members of her community have been following her methods successfully. However, a farmer’s most crucial capital is land, and for Susan the battle to get this crucial resource has tested her will.

Like most of the farming women in Nigeria however, Susan doesn’t own land. Since her husband is a former policeman without farming land too, she heavily relies on land rented from others.

“My biggest challenge is land. Land is my first issue. […] Other women may not be like me, as they usually get land from their husbands. When I request for land, I am not looking for a land like the size at my house, I am looking for a land that is modern. This is when they say this woman is more than a man.”

What she means by “modern land” is obvious: it has to be a minimum area of land which makes her farming profitable. Susan sees farming as a business and prefers contiguous land instead of tiny patches, hours away from each other. However, access to land can be a major obstacle for a small-scale farmer. There is a farmer around her village who recently sold his land for about N 1. 4 million (7000 Euro), a price Susan cannot afford. In struggling to find a piece of land, she eventually found a plot to hire about 28 km away from her home. Despite the distance, she is proud of her latest break through:

“Any land you see which is not cultivated, go inside that land and touch it, somebody will come and say it’s his great-grandfather’s land. But in that area where I have my new farm – 28km away from my house – they have a lot of land. In fact, I didn’t even use a single fertilizer and look how the maize has come out wonderful.”

The looming future of land crisis

Susan has somehow managed to replace the land which was grabbed from her, but her biggest “personal challenge” indicates a countrywide dilemma: How can land be fairly distributed in respect of farming, grazing, housing and other human demands, considering a population of about 250 million by 2050 in relation to 124 million in 2000? Right now, farming areas are expanding in order to meet rising food demands. One has to ask: Can Nigeria achieve food sovereignty without conflict?

“There are lots of places which were not being cultivated before”, Susan clarifies, “but within the last 5-10 years people have started cultivating those lands because they know that they can make money out of it. Before they only farmed little portions for what they eat, but now they farm to sell in order to send their children to school and for other things. It has become a problem – when a Fulani man sees you farming a new land, he would ask you where they should go to feed their cows.

When I came to clear a new land that was given to me, a small Fulani boy came to meet me and my children. As big as my children are the little boy was not afraid and he said Mummy, who ask you to come and cultivate this place? Is it Ta’Al [Tanko Al Makura, governor of Nasarawa State, North Central Nigeria]? I said that it was me who wanted to farm rice. When I walked home, I thought about that question and decided not to farm the land, as if I cultivated the land, I might end up getting nothing out of it. The farm was given to me on rent, but I was afraid and didn’t farm it.”

In fact, the Nigerian law puts the control of the land in the hands of the state’s governor. Herdsmen don’t own land and at the end of the chain it is the governor who bears responsibility to ensure that there are sufficient grazing areas. Other members of her community tell us similar stories about cattle eating up and damaging their crops. Rumors were rife that one farmer was shot by a herdsman about 20 km away from their village.

“We are farming in fear”, Susan concludes, “and If the problem continues we will not be able to farm in the next two years. Government has to do something, let them live separately.”

The clashes between farmers and nomads are widespread. It is also associated with desertification in the north as a consequence of climate change, which in turn increases pressure on grazing areas in southern lands. One solution however, is to raise the yields per hectare to mitigate spatial expansion thereby easing the increased strain on land. One could imagine how the picture would change, if only the half of Nigeria’s small-scale farmers could follow the footsteps of the Female Food Hero and double their yields. In her case it was Young Men Christain Association (YMCA) and subsequently Oxfam that provided her training.

“I told myself, if they say farming is a business, let me put more effort and see if I can get what I want from it. Now I know how to select the best seeds; we have been introduced to the seed traders and also to the company that provides fertilizer. With this knowledge we can just farm a small portion, take good care of it and can equally get good yields from that piece of land.”

“I told myself, if they say farming is a business, let me put more effort and see if I can get what I want from it. Now I know how to select the best seeds; we have been introduced to the seed traders and also to the company that provides fertilizer. With this knowledge we can just farm a small portion, take good care of it and can equally get good yields from that piece of land.”

We are eager to go out on the fields. Susan agrees to show us one of the plots that she farms. She is walking ahead, her hands gently touching the highest grass tips, an element that unites her with the earth.

We are accompanied by Ango Adamu from YMCA, an organization that provides extension services for small-scale farmers. He has been working with Susan for more than five years.

“Madam Susan depends on fertilizer. The land she got here is exhausted and it wouldn’t make sense to cultivate it without fertilizer.” Ango’s organization holds enough land to give exhausted soils the opportunity to regenerate. Susan however has usually no other choice. According to her, fertile land is preferably given to men, as “a woman is always said to be under a man who is supposed to feed her”. Being kept away from fertile land, she is forced to make use of chemical fertilizers which tends to stop exhausted soils from regaining fertility, depending on the quantity put in. In fact, there are no incentives to invest in long-term soil fertility for her.

“If you want to keep your soil fertile, you can use for instance organic manure of the rice chaff from the rice mill and put it on your land. After two, three years it becomes more fertile again, and this is if you own the land. If you don’t own it, by wasting your money and time on preparing the field the owner can come and take it away from you.”

This is exactly what happened to her. Up to now Susan doesn’t own a single piece of land. Her rice farm of about 3 hectares costs her N25, 000 (125 Euro) plus four bags of rice after the harvest, all paid as rent. In this respect, making land more accessible for the landless and especially female farmers would not only improve their livelihoods for the rest of their lives, but also encourage sustainable land use practices in favor of a more efficient land use.

Susan is a business woman. Coming back to her house, we get introduced to a credit and thrift group of small-scale farmers, she leads. The group pools together funds from which members can take out loans. It has existed for over twenty years now. Also, it was Susan who first invested in machines to process her groundnuts, and then encouraged others to invest in the same machinery. Now she stocks her store with spare parts for these machines.

We ask Susan what she would propose to us, if we were bank managers giving micro credits. Having learnt about the economic potentials of animal farming from opportunities in the United States, Susan said she would need access to credit to buy her own land so she can start integrated farming. She has a lot of ideas, but of course she wouldn’t share everything with us. She eyes the clock; we have to release Susan Godwin to a community meeting beckoning.

Peter Jopke is affiliated with the Henrich Boll Foundation in Abuja