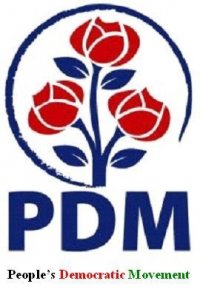 The police said it took a security precaution.

The newly registered Peoples Democratic Movement, PDM, Thursday, cried foul over allegations that the police in Bauchi stopped it from holding a meeting in the state capital.

The PDM said the stoppage would be the second time in one week that the Bauchi State Police Command would bar the party from holding a meeting in the state capital.

The National Chairman of the PDM, Bashir Ibrahim, in a text message to journalists, said the party was stopped from holding the meeting at Awalah Hotel, Bauchi, on October 5, despite obtaining police permit.

He said the party’s leadership was told by the State Police Commissioner that it could not hold the meeting outside its secretariat.

Mr. Ibrahim said he had already protested the action of the police commissioner to the AIG in charge of Zone 12, Edgar Nanakumo.

“We were asked by the CP (Bauchi) to apply for a police permit to hold a meeting at Awalah Hotel on Saturday October 5, having been denied the right to hold the meeting on Monday September 30,” Mr. Ibrahim said.

“However, after applying the CP insists we cannot hold our meeting anywhere in Bauchi outside our party secretariat.

“This is an illegal order and we appeal to the AIG to intervene as we plan to hold the meeting peacefully on the stated date.”

When PREMIUM TIMES contacted the Bauchi Police Commissioner, he did not give a definitive response.

“Has October 5th come? Wait till its October 5th before you can conclude that they were stopped from having their meeting,” Mr. Ladan said.

He said the police acted based on security considerations.