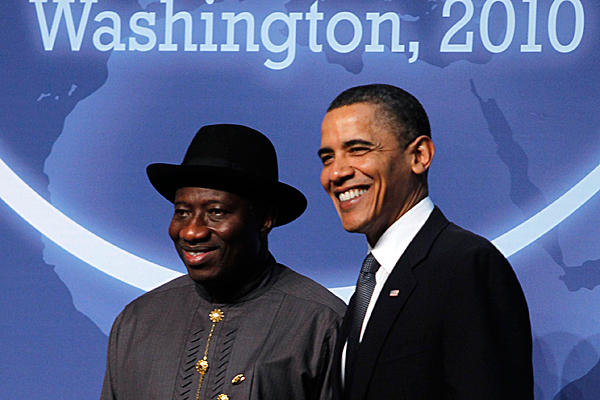 President Goodluck Jonathan on Monday in New York called for a stronger global consensus and determination to end the scourge of terrorism as quickly as possible.

Speaking at talks with President Barrack Obama of the United States ahead of the opening of the 68th session of the United Nations on Tuesday, Mr. Jonathan said that unless the international community unites and deploys its enormous resources to eradicate terrorism, it will continue to be embarrassed by terrorist outrages such as the heinous attack on defenseless shoppers in Nairobi at the weekend which both leaders strongly condemned.

He expressed his appreciation of the support and assistance Nigeria has been receiving from the United States for its fight against domestic terrorism. He added, however, that Nigeria will welcome even more bilateral collaboration in this regard.

The Nigerian President said that his administration also looked forward to the further strengthening of Nigeria’s relations with the United States in the areas of trade and economic development.

He reassured Mr. Obama of his commitment to the continuous strengthening of Nigeria’s electoral processes and the country’s democratic institutions.

President Obama had while welcoming President Jonathan to their meeting at the Waldorf Astoria Hotel in New York, described Nigeria as a critical partner of the United States in Africa.

He assured President Jonathan that the United States will continue to cooperate with Nigeria in all possible areas, including the war against domestic and global terrorism.

President Jonathan was accompanied to the talks by the Minister of State (Foreign Affairs), Viola Onwuliri; Nigeria’s Ambassador to the United States, Adebowale Adefuye; the Minister of Petroleum Resources, Diezani Alison-Madueke, and the Governor of Gombe State, Ibrahim Dankwambo.